June 26, 2012
5shares
Kindle has been around a while. My ex-husband bought a kindle when it first became available and I’ll admit I was slow to catch on. I love my paper library of books to read and could not imagine replacing them with an electronic alternative. However, due to increasing pain in my hands and wrists – which has been explained by a recent diagnosis of fibromyalgia – books became more and more difficult to read. A Kindle suddenly seemed like a better idea, and with an extremely tight budget since moving back out on my own it also started to make a lot more sense financially.

Thanks to one of my brilliant and creative facebook friends, I found out that I don’t need to buy a Kindle – though a Kindle Fire

would be amazing to have – to actually have a Kindle. Amazon now offers Free Kindle Apps

for your iPhone, iPod Touch, Android, Window Phone 7, Blackberry, iPad Tablet, Android Tablet, and both Windows and Mac computers. I downloaded the free Kindle App for my Macbook and have been in heaven since. 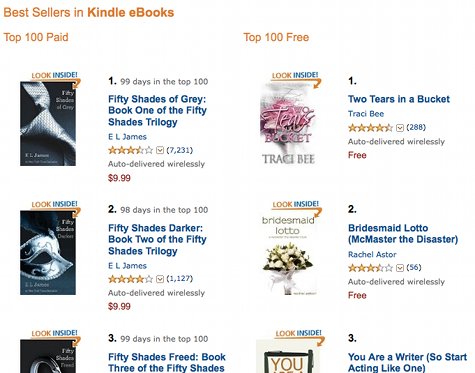 at a reduced price compared to the paper version of the book – some substantially so. In addition, Amazon offers many free books for Kindle – including a Top 100 of Free Kindle eBooks

. New free books for Kindle are added to Amazon every week. Additionally, many books that are not free can be borrowed at no cost with an Amazon Prime Membership

by Taryn Browning, Her Dear and Loving Husband

and by Christiana Miller. Currently I’m reading by A Perfect Blood

by Kim Harrison on my Kindle App for Mac. Next I plan to read the Fifty Shades Trilogy

Are you an avid reader? If so I’d love to hear what’s on your bookshelf – or in your Kindle library!