July 30, 2013
I may receive compensation from links on this site. As an Amazon Associate I also earn from qualifying purchases. See my disclosure policy.
4shares 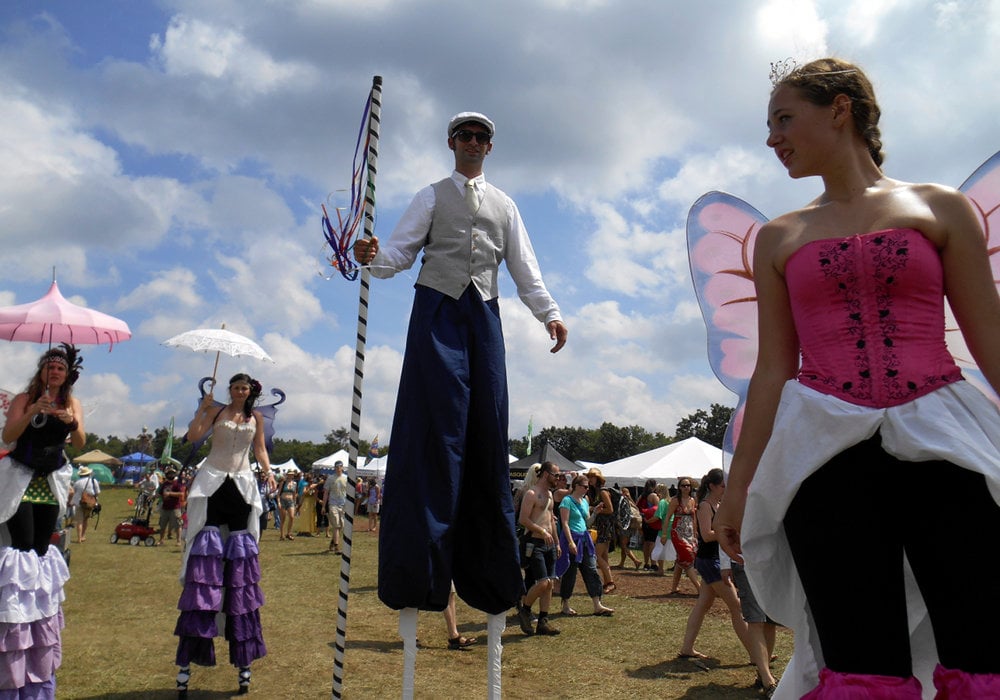 My vacation, a four day three night trip to Floyd Fest 12 Rise & Shine, was much more of an adventure than I had anticipated. My first day there was gorgeous and sunny and filled with music, delicious food and crafts and these lovely faerie inspired darlings on stilts. The weather was gorgeous and not brutally hot with a forecast for sunny skies and only a chance of spotty thunderstorms.

The morning of day two, I got my hair braided so I wouldn’t have to fuss with it. And then, halfway through day two it started to rain. We waited patiently into the early evening anticipating it would stop soon. It didn’t. And not only did it rain, but it poured throughout the rest of the day, the night and halfway into the next day. 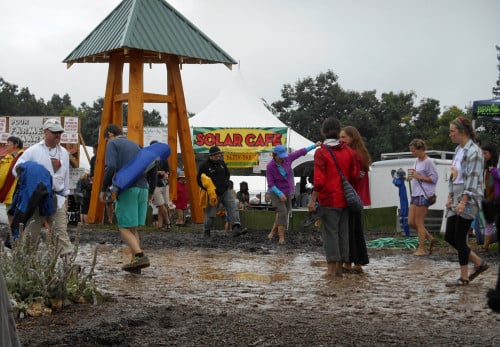 Our tent – and just about every tent pitched on Thursday – ended up being flooded. Some folks bailed on the festival entirely waiting in line for over an hour to get shuttled back to their cars due to the mass Exodus. Our 10′ x 10′ tent flooded as well, leaving a good 2/3 of it completely wet and damp. Luckily my backpack full of clothes and the mat underneath my sleeping bag soaked up most of the water and the worst of it pooled along one side – my side. So while there was a small stretch of tent that wasn’t soaked, all of my clothes for the trip were a lost cause. But we toughed it out. 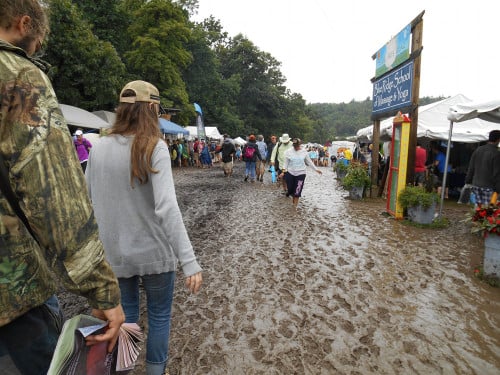 Here’s what I refer to as the Mud Walk of Floyd Fest – a muddy walkway that only got worse as the days passed. Tractors came in with hay, but within minutes of people passing, the hay had disappeared entirely within the mud like it was never there. You had to tread carefully or you’d slip and fall. One guy lost a shoe in the mud – which was ankle deep in spots – while those with flip flops had to pitch them for bare feet for traction. 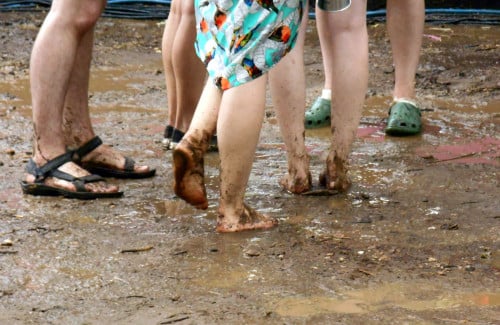 The beer gardens were significantly less muddy. Or rather, the mud wasn’t a deep gorge of mess, and the music and dancing continued despite the rain, occasional thunder, and of course, mud. 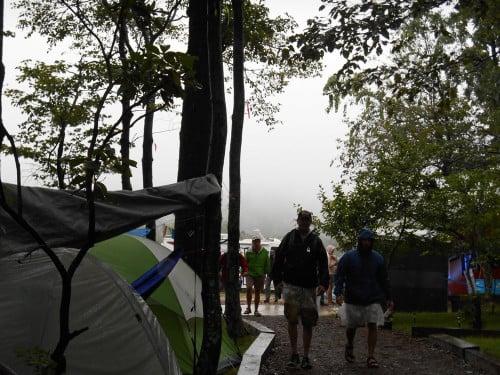 There was also a misty, foggy morning in the mountains that while gray, was actually kind of beautiful. 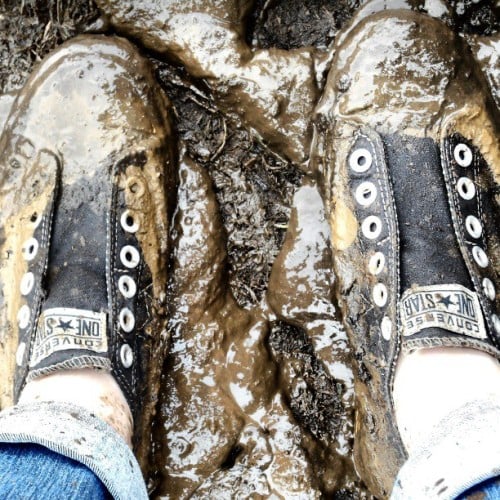 If it wasn’t for having to sleep on the ground in a damp tent, walk through some major thigh busting mud (which is ten times worse with fibro,) and wear the same clothes and seriously wet, mud caked shoes for three days, I probably would have enjoyed it. (Yes, those are my shoes.) 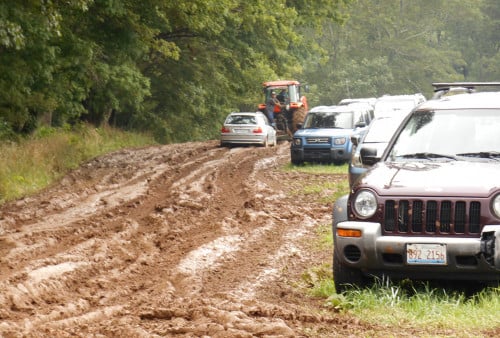 By Sunday I was more than ready to head home. Unfortunately we have had a ridiculous amount of rain this spring and summer. Basically it rained almost daily for about two months with more rain than Seattle’s average in the same time period. (No joke. We have had multiple flash floods and lots of property damage.) So when it came time to leave the Alpha Lot – which was pretty much a giant field – that we were parked in, it wasn’t easy. I seriously don’t think these photos due the mud justice because the ruts of mud in this field/parking lot were up to a foot deep in places. Cars had to be towed out one by one courtesy of some super nice folks and their tractors. Mine included. 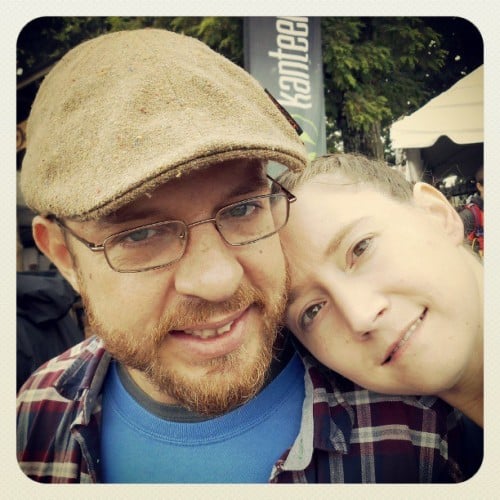 By the time I got home I had sworn off ever going to Floyd Fest again. It wasn’t terrible, but it wasn’t the most enjoyable experience either. I convinced myself I am a die hard city girl despite all of those camping trips to the beach every year as a child from as far back as two years old. However, I am glad I went because now I know what everyone said I was missing – or rather wasn’t missing in my case – and it was definitely something to remember and talk about when I’m old and 80.

Two days since coming home, though, I’m sort of considering trying it all over again next year. Or the year after.  Maybe. But if I do go I’m going to save and shell out the cash for a VIP ticket and on site parking. (Thank goodness for the calming effects of acupuncture!) After all, the music WAS amazing. But for now, I’m ready to jump back into making homemade soaps and other bath and beauty concoctions again. I’ve realized that maybe I’m not quite as daring and adventurous as I’d sometimes like to be. But I think that’s okay, because I’m exactly who I want to be.

Has anyone else had a vacation this year? Where did you go? I’d love to hear all about where you traveled and how it went!

We use cookies to ensure that we give you the best experience on our website. If you continue to use this site we will assume that you are happy with it.OkRead more