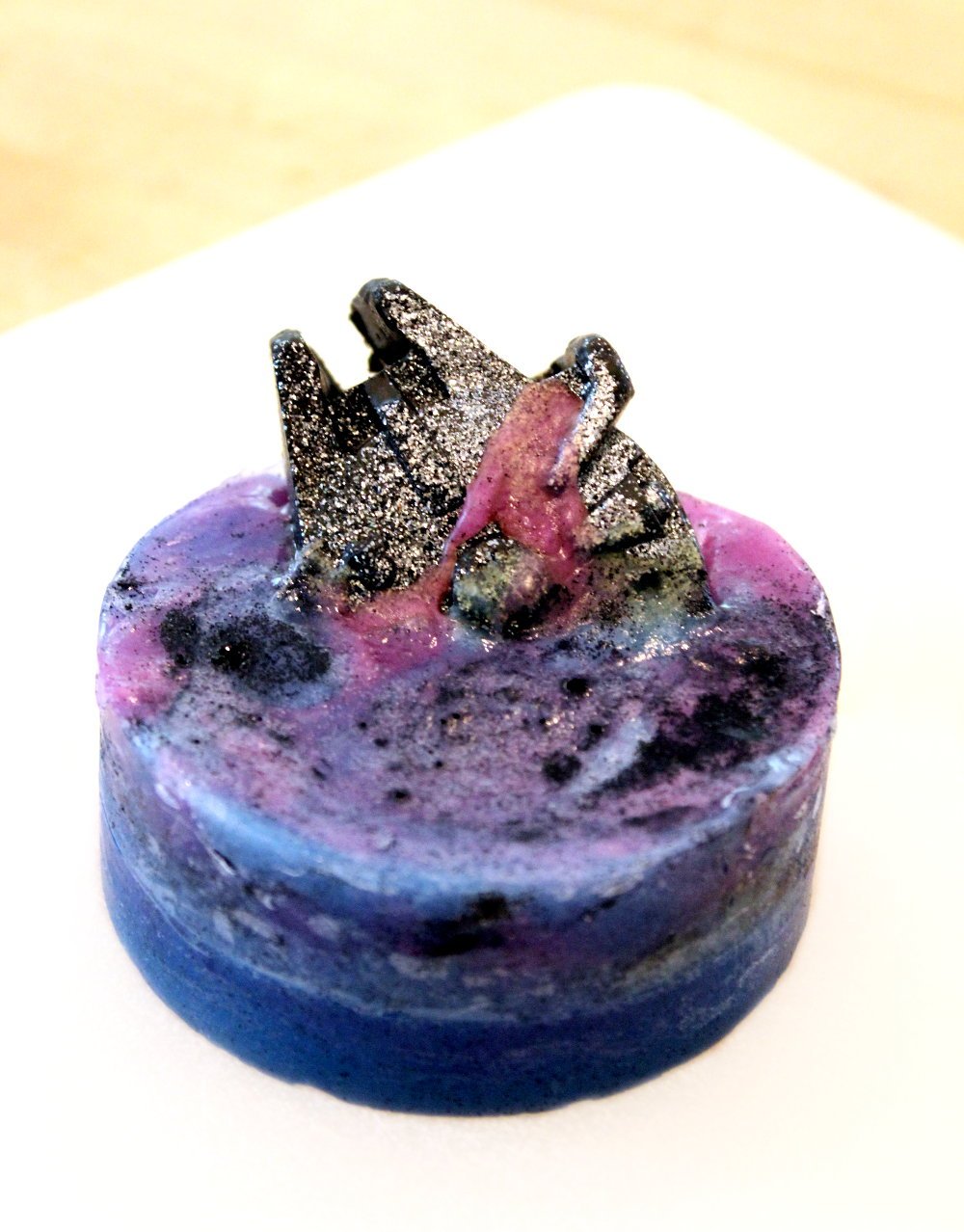 April 29, 2017
I may receive compensation from links on this site. As an Amazon Associate I also earn from qualifying purchases. See my disclosure policy.
17shares

Being human we all make mistakes. Sometimes we even have soap disasters. Now these soap disasters can be rather disheartening especially if you worked really hard on something or you’re still new and just can’t seem to get it right. I’ve had two soapmaking disasters recently. What I’ve learned is, unless you make soap that’s lye heavy – it’s never really a disaster. What it is is an opportunity. A creative addition. An embed or an ingredient. A learning experience. 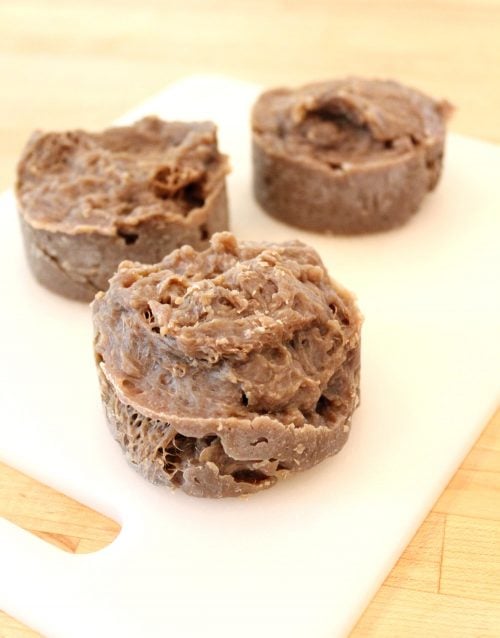 The first time I made my yogurt & banana soap recipe with flax seed oil, it separated on me. I’d ended up with a false trace and tried to pour it sooner than I should have. I’d wanted to pour the soap into a mold with a loaf of loofah in it. And I was afraid that if it traced too heavily, then it wouldn’t go into the loofah at all. (This soap was inspired by this Dead Sea sponge soap.)

To save it, I dumped it all into a huge pot on the stove the next day. I added some half and half, some cocoa butter, some beeswax and a bit of stearic acid to harden it up. I tore the loofah up as I mixed everything together in the pot over heat. Then I remolded them.

These soaps actually turned out great in the end. (They’re pictured above.) The soap isn’t really pretty. It’s very rustic. But it is super conditioning and has some interesting texture because of the loofah. 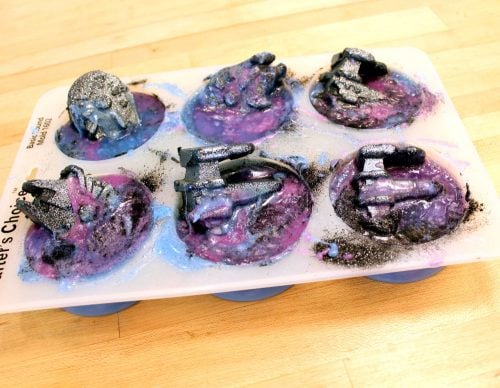 The other soapmaking mishap took place when I was making my chia & charcoal soap recipe for the first time. I was wanting to use some of the soap batter in my Star Wars mold. Unfortunately, I had to mix this one to a heavy trace to be sure I didn’t get a false trace like the last time. And, I had to soap hot because I was using candelilla wax.

The soap batter made it into the mold, but even with pushing the soap into the mold with a spatula and some tapping, there were pieces of wings and other details missing from the ships. So I did what any soaper in my position might do. I drank a bottle of pinot grigio and embedded them into melt and pour soap galaxies!

I think they turned out pretty neat in the end. So I wanted to share how I made them.

To create these Star Wars inspired soaps, I first dusted the inside of my Star Wars mold with some super sparkles mica and jet black cosmetic glitter. (You could also use black flare mica.) I then filled the mold cavities with my chia & charcoal soap batter. (You can use your own favorite cold process soap recipe for this project! Just color the soap with coconut activated charcoal, Australian midnight black clay or black mica powder.

Once the soaps cured, I embedded them in a melt and pour soap base. I specifically used Stephenson’s natural crystal soap base. I chose this soap base because it has a high melt point and cools rather quickly which makes it great for swirling. (If you want to scent your base, be sure to weigh the amount of soap you’re using so you can figure out how much fragrance oil to add based on manufacturer’s guidelines.)

I cut this base into chunks, then divided it between two Pyrex measuring cups. I heated the soap at reduced power in the microwave until melted. Then, in one container I added electric blue mica powder. In the other I added cyber grape mica powder. (Both were added to suit.) I then mixed each batch of soap individually until the color was evenly distributed throughout the melted soap bases.

Next, I poured a small amount of the melted blue soap base into the cavities of my Crafter’s Choice basic round soap mold. I dusted some black glitter on top of that, then swirled the soap slightly with a fork. I waited for the soap to cool slightly then repeated the process with the melted purple soap. 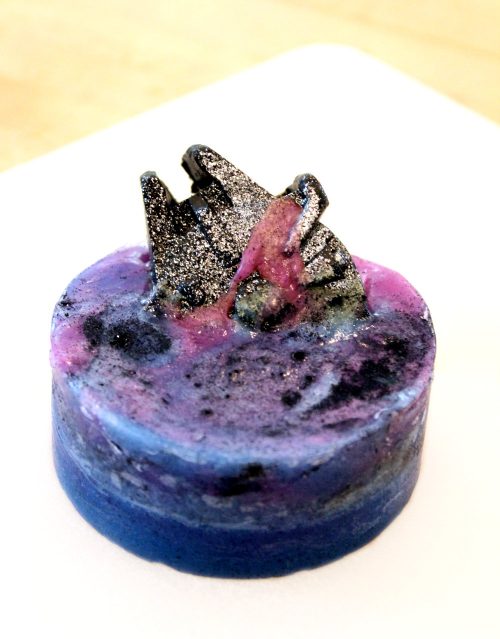 I allowed the soap to cool a bit more then I placed one of my ships into a cavity of soap and positioned as desired. Then I repeated layering the melted blue and purple soap with glitter until the cavity was full. I then repeated the process for all the remaining cavities of my mold. 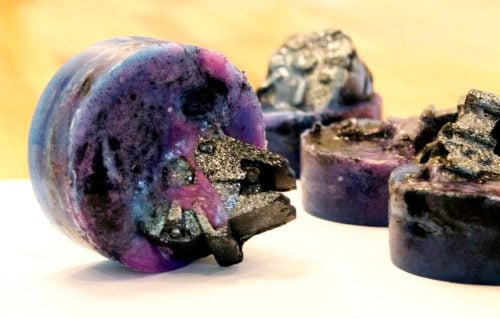 Once the soaps hardened completely, I unmolded them and wrapped them tightly in foodservice film. And that was it! I hope this inspires some of you and that it helps newbies to realize that you never really fail. You are simply learning something new!

That’s all for this week! I can’t wait to dive into new some new soapmaking projects with you next week! Have a wonderful weekend, everyone! And don’t forget to find & follow me on Pinterest,  G+,  Tumblr,  Facebook,  Twitter,  Blog Lovin’, and Instagram. Or sign up to receive new posts from Soap Deli News blog to your email via FeedBurner so you never miss a post.