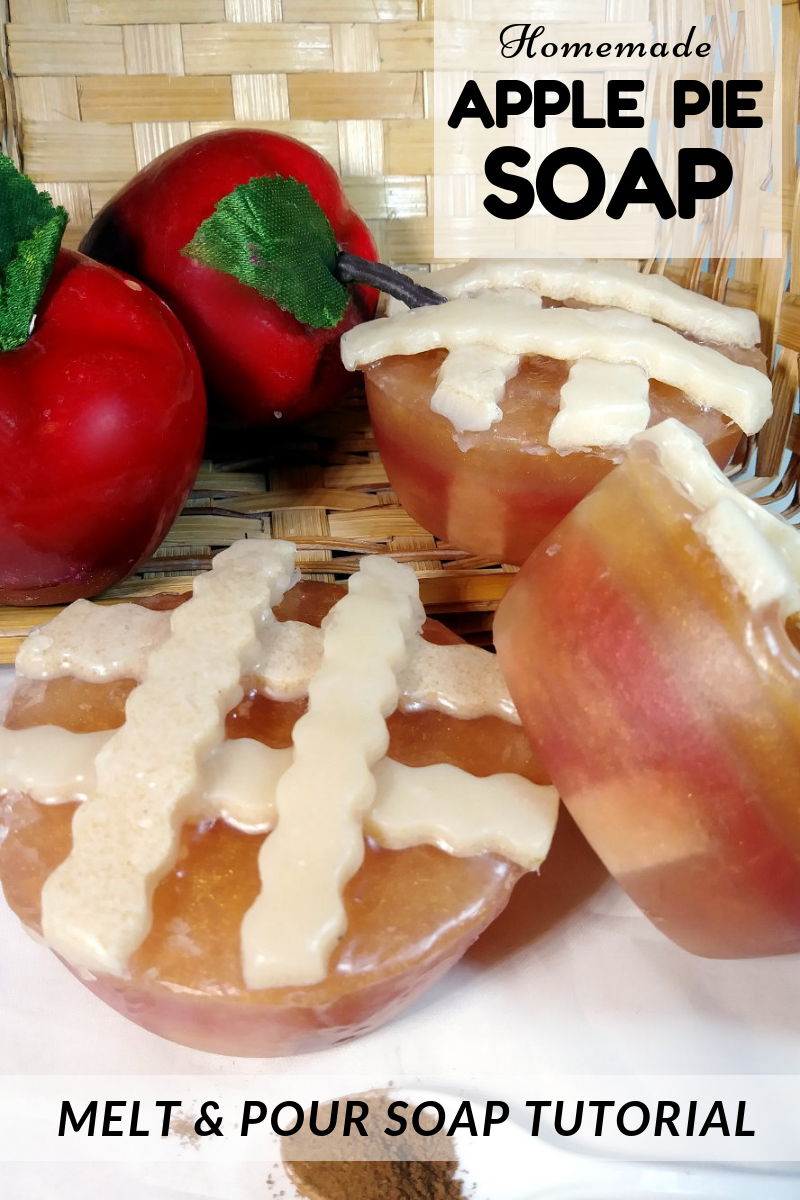 Learn how to craft your own melt and pour soaps for seasonal fall gifts with this instructional homemade apple pie soap tutorial from guest blogger, Amy Turner, of Just Soapin Around. 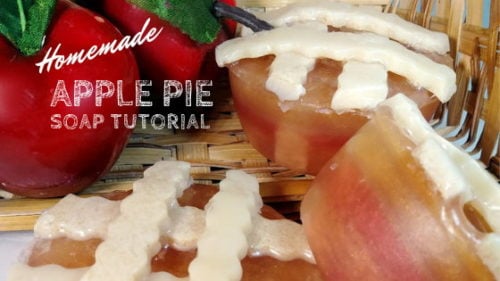 Picture this. Running around kicking up leaves that have fallen from the trees after the colors have changed. Feeling the cool air against your face and suddenly you smell the aroma of your grandma’s baked apple pie. The scents of cinnamon, apple and a touch of vanilla with that warm flakey crust. Sounds amazing, right?

That is how I envisioned my homemade apple pie soap when I was in the process of creating it. What I ended up with is an amazing oatmeal glycerin soap that really looks like apple pie. Scented using an apple pie fragrance oil, this homemade melt and pour soap tutorial is perfect for fall. And it makes wonderful homemade holiday gifts too! 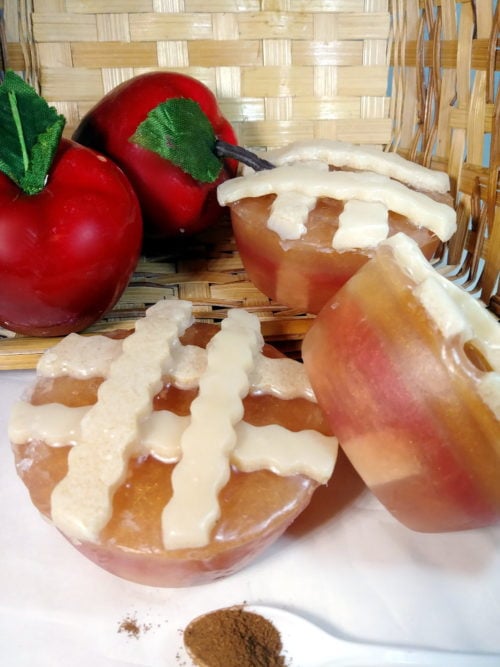 Using a sharp knife, cut a 2lb. brick of melt and pour oatmeal soap base in half. Cut one pound of the oatmeal soap base halves into small squares. Then place eight soap squares into eight cavities of a silicone cupcake mold.

Now cut the 2 lb. brick of the clear glycerin melt and pour soap base into chunks. Combine in a large glass Pyrex measuring cup.

Then heat the soap base in the microwave in 30 second increments until melted. (Alternately you can also use a double boiler.)

Now slowly pour the first color of your melted soap over the oatmeal squares in your cupcake mold. (Take care to ensure the temperature of your soap is between 115°-120°F to avoid unintentionally melting the oatmeal soap squares.)

Spritz the top of the poured soap with rubbing alcohol in a spray bottle or mister to remove any air bubbles. Then pop your mold in the refrigerator.

Once hardened, repeat with the remaining two colors, spraying each layer with rubbing alcohol before pouring the next layer.

Cut the remaining half of the oatmeal soap base into chunks and heat until melted.

Next, pour a thin layer of the oatmeal melt and pour soap base into each cavity. Spritz the top of the melted soap with rubbing alcohol to remove any air bubbles, then allow to cool.

Once the oatmeal soap has hardened, remove it from the mold. Then cut each section of soap into four strips using a crinkle soap cutter. Set aside.

Once your scented apple pie soaps have fully hardened in the mold, you can apply your oatmeal soap pie crust. Start by unmolding the apple pie soaps.

Melt a small amount of clear melt and pour soap base in a heat safe container.

Then spread a thin layer of melted clear base onto your oatmeal soap strips. Apply four strips of soap to the tops of each homemade apple pie soap in a lattice pattern.

After you have applied all four soap strips to your apple pie soaps, cut off any excess.

Put each of the homemade apple pie soaps back into the silicone mold.

Then spray the tops of each homemade apple pie soap with rubbing alcohol.

Next, pour a thin layer of the melted clear glycerin soap base on top of each pie. This gives your apple pie soaps a glazed look. (You may have to reheat or melt more of the clear soap base for this step.) Follow with rubbing alcohol to remove any air bubbles, if needed.

Allow the soap to harden. Then take each homemade apple pie soap out of mold. Cut off any excess soap and smooth the edges as needed.

Your homemade apple pie soaps are now ready for gifting!

I recommend wrapping each bar of homemade apple pie soap tightly in foodservice film to store when not in use or prior to gifting. This will keep the soap from attracting moisture from the air.

I hope you enjoyed my homemade apple pie soap tutorial. If you have any questions about the process, please feel free to ask them in the comments. In the meantime be sure to follow me on Facebook for sneak peeks at new products and sales notifications.

Hi! I’m Amy Turner and I live in Truth or Consequences New Mexico and owner of Just Soapin Around. I am a mother of four wonderful children and two rambunctious dogs. I have always worked with herbs and essential oils and love handmade products. In 2014 I was diagnosed with multi-chemical sensitivity and was told I needed to switch everything to all natural ingredients. After making my own handmade products, I launched Just Soapin Around in 2015 and have been selling ever since.