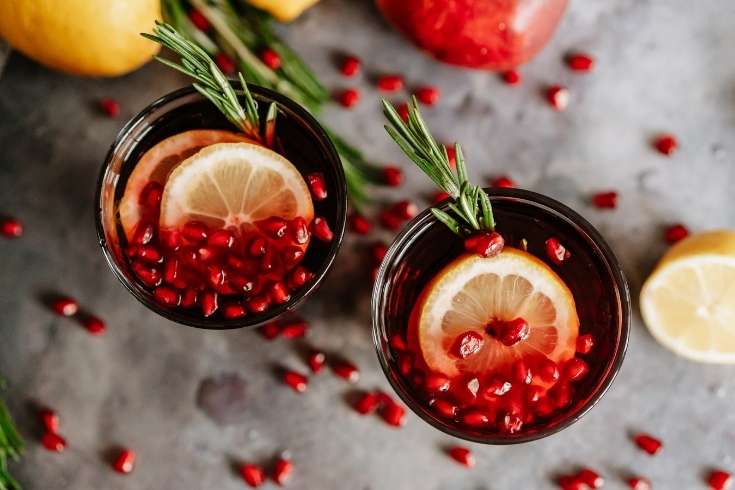 Learn how to make this delicious pomegranate cider recipe for your next holiday party. This warm winter drink is easy to make on the stove top or in a slow cooker or crockpot. And your guests will love the flavor combination of pomegranate, apple cider and warm spices that give it a unique and complex flavor. For the adults, add some rum or whiskey for a pomegranate hard cider recipe as a fun twist on a spiked mulled cider.

Spiced apple cider is a popular drink from fall through the holiday season and into the new year, but this pomegranate cider recipe is a twist on the classic recipe. It’s made similar to a spiced apple cider, but the pomegranate juice gives it a unique flavor that your guests are sure to love.

This winter drink recipe is also easy to turn into a pomegranate hard cider recipe. You can add alcohol to the entire recipe after it is finished cooking. However, you can also add it by the cup if there are children present or adults who won’t be drinking. 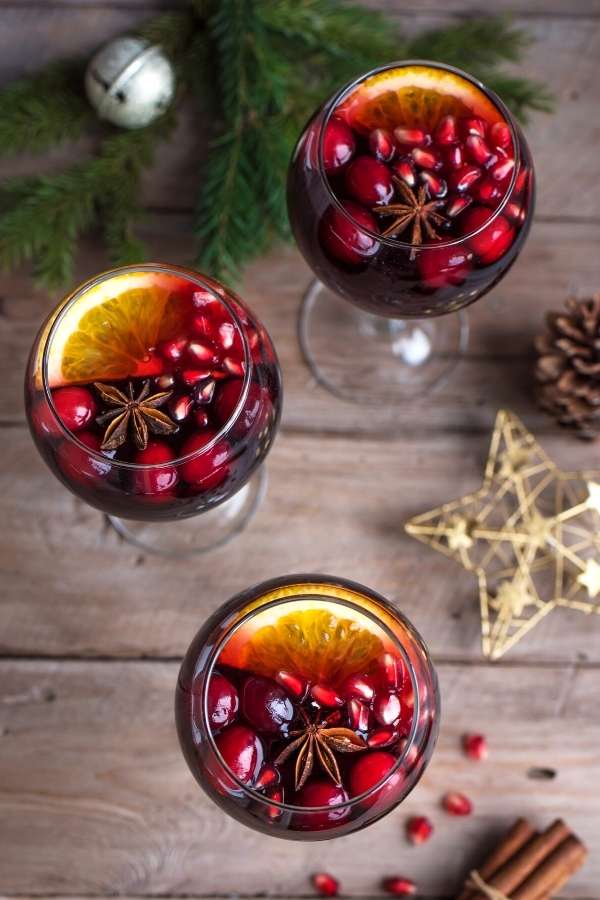 How to Make Pomegranate Cider

If you’re ready to enjoy the health benefits of pomegranate juice in a delicious spiced cider, then get ready to quench your thirst. Here are the ingredients you need to make a party pleasing pomegranate cider for friends and family this holiday season or as a warming winter drink.

Besides being delicious, I like to make this pomegranate cider recipe because of the health benefits of pomegranates. Although this recipe does have sugar (more on that below), it does have certain benefits for your body thanks to the pomegranate juice.

Pomegranate juice is higher in antioxidants than most other juices. In fact, it has three times the antioxidants as green tea or red wine! These antioxidants can help reduce inflammation and protect your body from free radicals.

In the same source, they found that drinking pomegranate juice can improve heart health, lower blood pressure and reduce lipids in people with type 2 diabetes. Although more studies are needed, this is promising.

In addition, pomegranate juice has more than 40 percent of the recommended daily value of vitamin C per serving. It also contains vitamin E, vitamin K, potassium and folate. These vitamins and minerals can support your immune system and overall wellness.

When shopping for juice for this pomegranate cider recipe, look for one that is 100 percent juice. It has to be refrigerated at all times, so if you can’t find it at the store, look with the refrigerated juices like orange juice or in a cooler near the fresh fruits and vegetables. 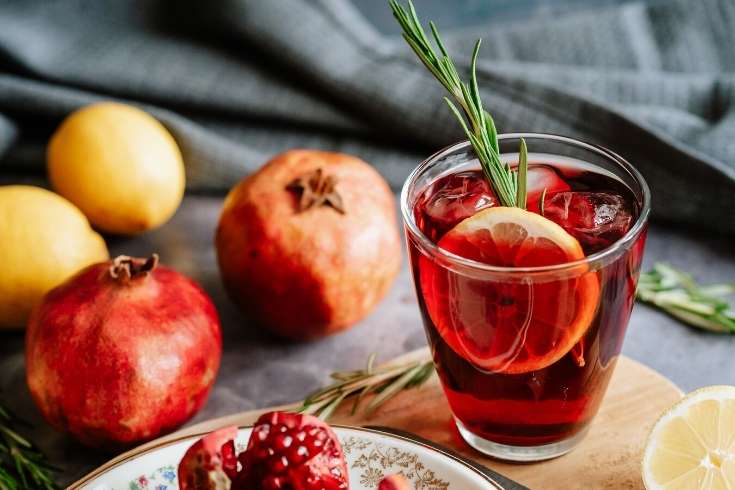 You can make this pomegranate cider recipe with water or apple cider. Personally, I like the richness of the apple cider. It gives it a more complex flavor, and it’s delicious for fall or winter drink with the tart apple taste.

However, you can use water if you don’t have apple cider or if you simply want to cut calories in this drink.

Pomegranate juice does have natural sugar, but it is a tart juice. You’ll want to add some sweetener to your pomegranate cider recipe. You can use your choice of sweetener. For a traditional sweetener, I prefer brown sugar over white sugar. You can also use raw honey if you prefer.

You can also use coconut sugar, stevia or monk fruit for sugar alternatives. You may need to adjust the amount of sugar if you use a sugar alternative. I recommend adding half of the amount while it’s cooking and add more to taste. Alternately, you can make it without any sweetener and add it at the end. Coconut sugar and monk fruit dissolve better in warm liquids, so they may be harder to dissolve if you add them at the end. 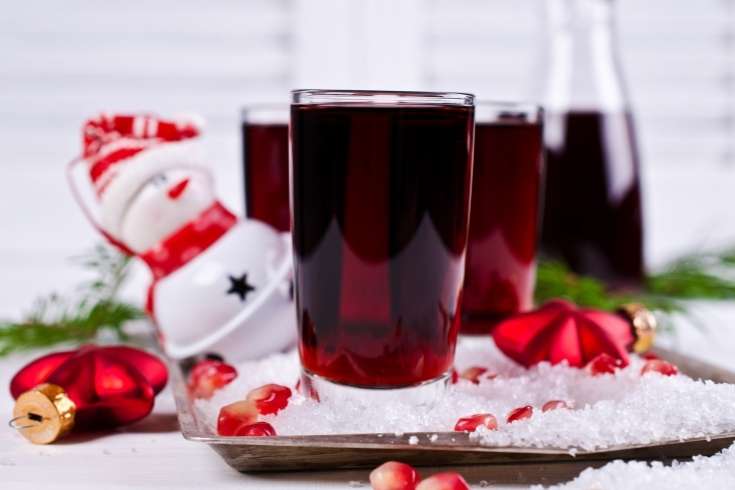 The spices use are similar to ones you’ll find in a chai tea recipe. These warming spices have natural health and wellness benefits that can help boost immunity, while cinnamon has been known to also help lower bad cholesterol.

This gives this delicious winter drink some more depth in flavor. You can also add 1 or 2 cardamom pods if you like. Or use mulling spices.

You can also make a spice bag out of cheesecloth. To do this, cut two 8-inch squares of cheesecloth. Place the spices in the middle of the cheesecloth and bring the corners up to make a pouch. Then tie shut with string.

Personally, I prefer to use the slow cooker for this mulled spice winter drink, especially if it’s for a large group of people. I think letting the juice and spices cook longer gives it more flavor and depth. This also allows me to make it well before my guests arrive, so I am not rushing to make it while I have company. 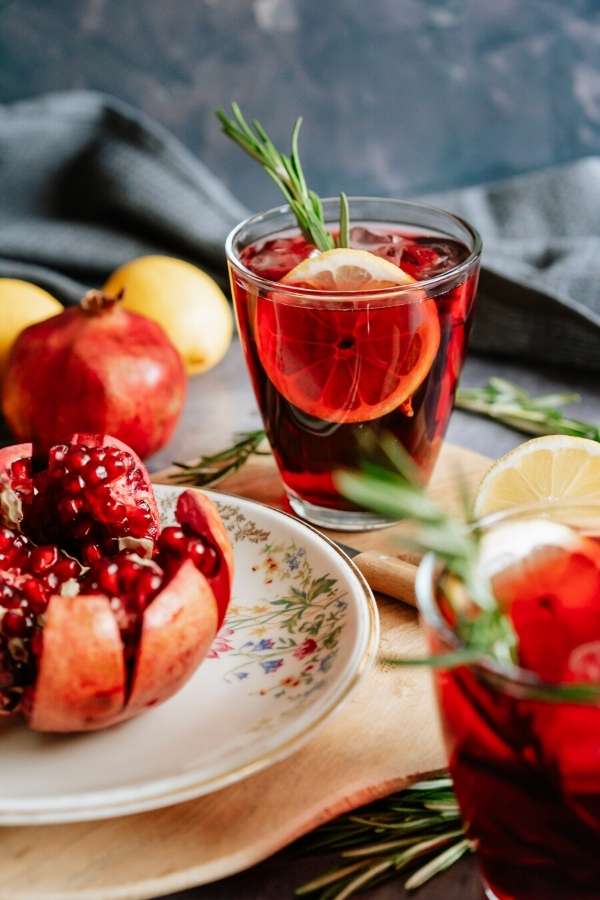 It’s easy to make a pomegranate hard cider recipe. Simply add 1 cup of either rum or whiskey to this recipe after you’ve cooked the spices with the juices. When I make this in the slow cooker, I turn the slow cooker off or on the keep warm setting after I add the alcohol.

You can also set out a bottle of rum or whiskey. Your guests can add their desired amount to each cup to customize this winter drink. 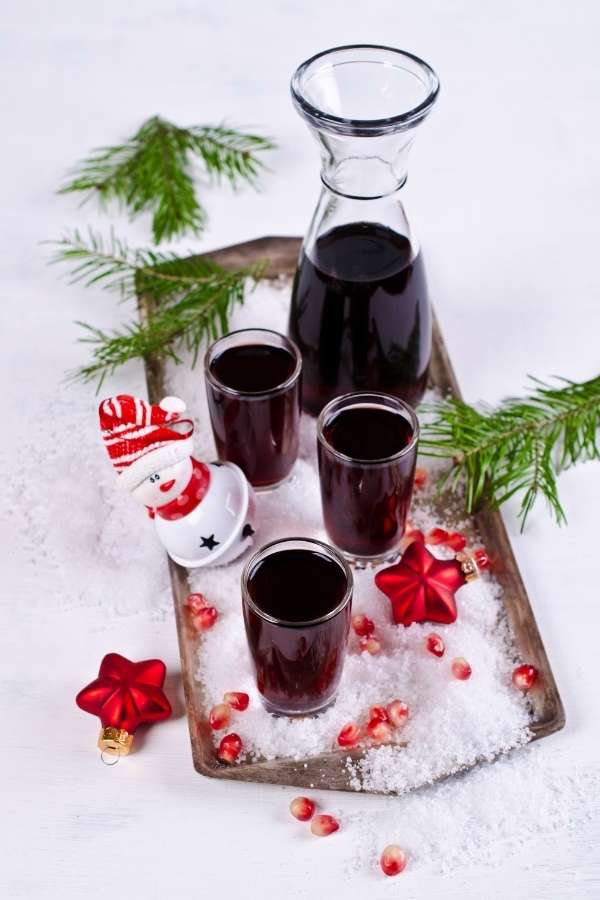 To make this mulled spice winter drink, place the cinnamon sticks, anise stars and whole cloves in a spice ball or cheesecloth.

In a large pan or in a slow cooker, combine the pomegranate juice, water or apple cider, brown sugar, orange juice, lemon juice and the spices.

To mull this cider on the stove, bring the ingredients to a boil and then reduce to a simmer for 10 minutes. Remove the spices and serve.

If cooking the cider in a slow cooker, heat the ingredients on low for 2 to 4 hours. Then remove spices and serve.

If rum or whiskey is desired to make a hard cider, add the alcohol after you remove the spices, just before serving.

To make hard pomegranate cider, add 1 cup rum or whiskey after you remove the spices, just prior to serving. 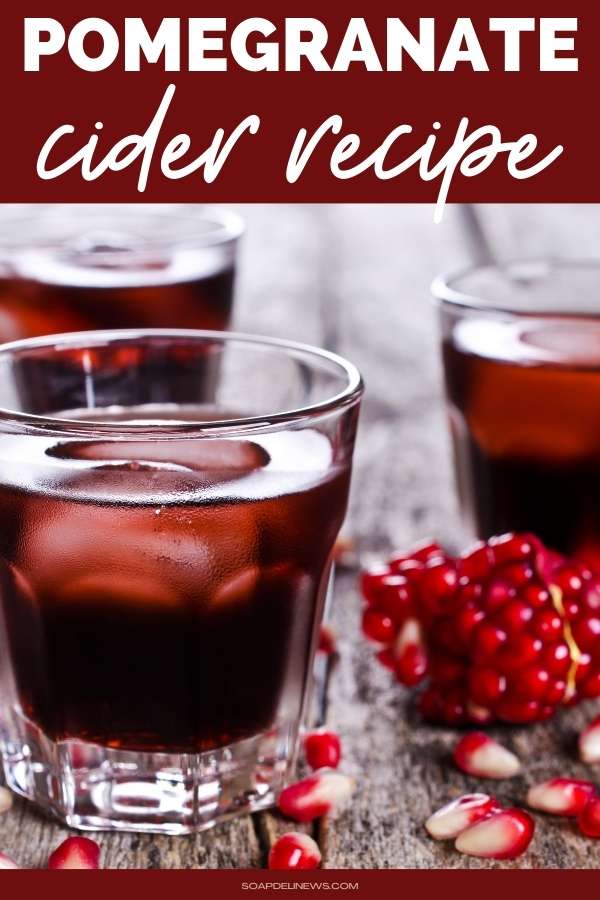