For New Year’s Eve my boyfriend cooked me up a special dish choosing from several of my favorite foods to eat: tuna, shrimp and asparagus with the fact that I love sushi niggling in the back of his head. The dinner was in truth a great experiment that we both thought turned out to be a great success. Scott, my boyfriend, calls it Seared Sashimi Tuna and Sautéed Shrimp in an Orange-Soy-Ginger Reduction Sauce with a side of Asparagus. You may want to file this one in your recipe book as simply “DELICIOUS.” 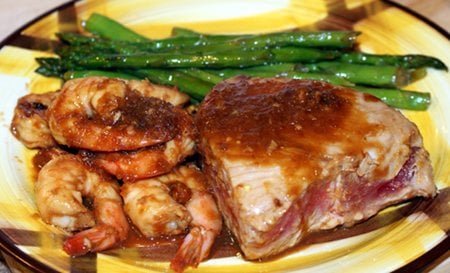 Following is the recipe for Scott’s dinner. Keep in mind that for him cooking is an art – and while he by means thinks of himself as a great chef – he doesn’t treat his dishes like and exact science. He likes to have fun with his food preparation and all ingredient amounts are approximate because he never measures anything. Basically, he considers himself a self-taught cook who just likes to eat. He rates his own recipe 4 out of 5 stars and I think that’s pretty darn accurate. I encourage you to try this recipe, play around with it a little yourself with a little more of this, a little less of that and maybe something we never would of thought of. Then come back and tell me how it turned out! You can want to cook this up for your special someone on Valentine’s Day! 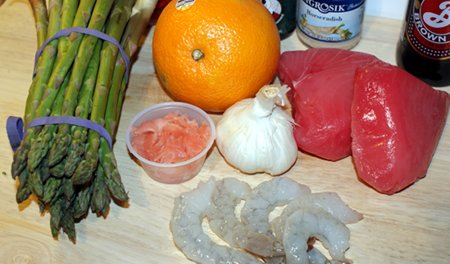 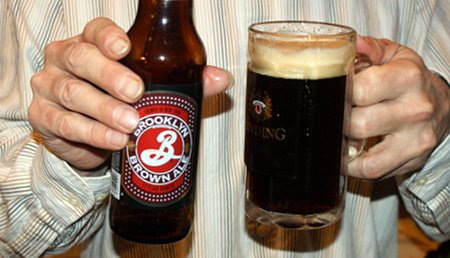 (Because it’s fun to get a little crazy.)

This recipe can be made using one pot, a random dish for marinating the tuna and shrimp, one large saucepan to minimize clean up later – and a colander. You’ll also need a knife and a spatula at minimum. So even bachelor’s wh generally eat out can probably swing this one as long as their stove top works.

Asparagus Prep: First you’ll want to prep your asparagus for later. Rinse your asparagus in cold water, then snap off the ends. You’ll know where to snap because if you try to snap too low you’ll get some resistance. Move higher if this happens and you’ll end up with great tasting asparagus and no chewy, tough ends to contend with. (It still boggles my mind that there are restaurants who leave the ends intact.) Bring a pot of water to a boil, then blanch the asparagus in boiling water 1-2 minutes until bright green. Transfer to a colander and drain. Set aside. (I’ll admit we did consider buying both white and green asparagus, but as I’d never tried white asparagus, I chickened out.)

Make Your Marinade: Your marinade is what will later become your Orange-Soy-Ginger Reduction sauce. So be sure to reserve about 1/3 of this marinade for your sauce later on. First, however, you’re going to make a marinade for the shrimp and tuna. 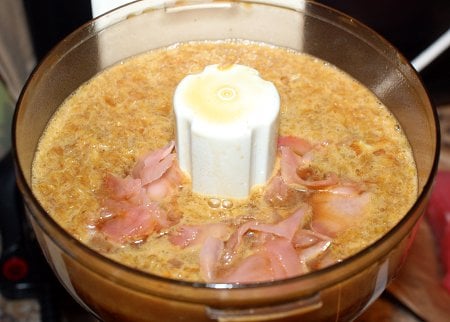 In a food processor combine approximately 1/8 Cup peanut oil, 1/4 Cup soy sauce, 1/8 Cup toasted sesame oil, about an 1/8 Cup pickled ginger, your whole naval orange peeled and sectioned, 3 cloves of fresh minced or chopped garlic, a dash of black pepper, 1 Tablespoon horseradish, 2 Tablespoons of the hot sauce, and if you want to be silly like us – a dash of beer or wine or both just for kicks. Blend well. 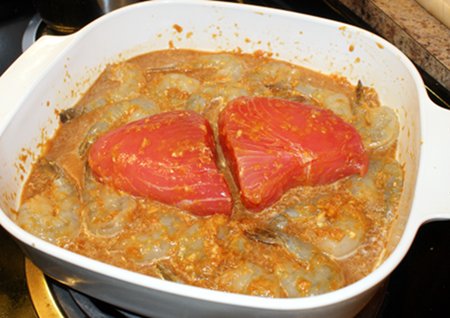 Then pour about 2/3 of the marinade into a dish with the shrimp and tuna. Allow to marinate for approximately 10-15 minutes. 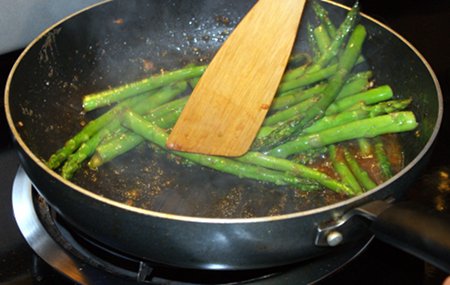 Cook the Asparagus: While your tuna and shrimp marinate, you’ll prepare your asparagus. Add a little peanut oil, toasted sesame oil, soy sauce, and a couple of teaspoons of the marinade into a large saucepan over medium high heat. Once hot, add the asparagus and saute for 4-5 minutes. Remove from pan and cover. 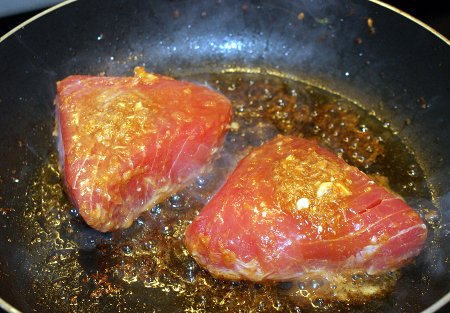 Sear the Tuna: Using the same pan you just sauteed the asparagus in and still over  medium-high heat, add a bit more peanut oil and soy sauce and a Tablespoon of the marinade to prep the pan. Add your sashimi tuna steaks to the pan and sear on each side for 1 – 1 1/2 minutes. Remove from pan and plate. (You want it rare inside because rare tuna is tasty!) 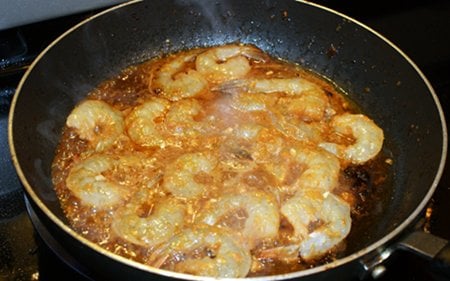 Saute the Shrimp: Again, you’ll use the same pan you just seared the tuna steaks in. Add a bit more peanut oil and soy sauce and about a Tablespoon of marinade to the pan. Add the shrimp and saute over medium-high heat until pink, turning once. Remove the shrimp from the pan – while reserving as much “juice” as possible in the pan – and drain the shrimp in a colander. 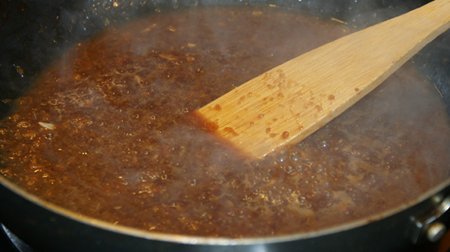 >Prepare your Sauce: Now you’ll make your Orange-Soy-Ginger Reduction Sauce. To do this, simply pour the remaining marinade set aside earlier into the saucepan you just used to cook the tuna, asparagus and shrimp. Add a touch more peanut oil followed by a shot or two of wine. White is recommended – we used a Riesling only because that’s what I like to drink – but you can go a little wild like us and add a shot or two of red wine as well. Oh, and maybe just a touch more beer. We did. Leave the marinade mixture on medium-high heat stirring occasionally until it reduces into a sauce.

Plate it and serve: Plate your shrimp with tuna and pour as much sauce as desired over the tuna and shrimp. Add asparagus to the side and serve immediately. 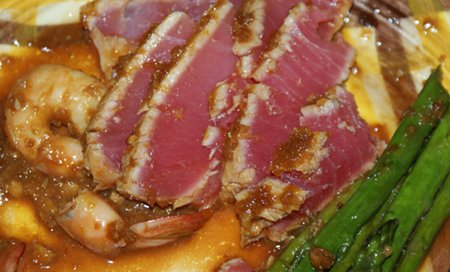 The center of the tuna when cut should be rare with just the edges seared. I like to eat mine with some fresh pickled ginger.

As an afterthought, Scott also made the suggestion of encrusting the tuna steaks with sesame seeds and a bit of cracked peppercorn and sea salt by coating the surface of the tuna just before placing in the hot oil in your pan.

Looking to purchase quality, organic herbs, spices and seasonings for your own gourmet dishes at home? I highly recommend shopping Mountain Rose Herbs for the best quality and prices. Not only will you receive a great product, but you will save a lot of money by buying in bulk over shopping for spices at grocery stores.