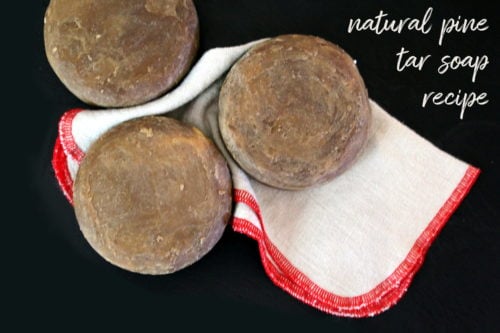 When I was eight I went on my very first (and only) snipe hunt with my Brownie troop. It was just one part of an adventure filled summer in which I also learned how shoot a bow and arrow. Our group leader had, of course, planned out the snipe hunting trip in advance.

Having grown up with family who went on yearly hunting trips for venison (in addition to the occasional squirrel or rabbit) a snipe hunt seemed like a completely plausible scenario to teach us a new life skill. As our snipe hunt took place prior to the existence of the internet, we had no way of knowing one way or the other what a snipe hunt was other than what we were told. Naturally everyone in my Brownie troop was excited about the idea of catching our very first rabbit-sized snipe.

The day of the snipe hunt we were given a rather vague description of what snipes looked like. One girl was given a large fishing net. Another Brownie was given a bag. The rest of us found sticks that we could use to scare a timid snipe out of the brush. So off we went, huddled in a group half skipping with excitement, down a forest trail with sticks in hand.

Our group leader would occasionally travel ahead only to rush back claiming from time to time that she’d just seen a snipe – what was a wonderful yet entirely imaginary creature. This fueled our excitement and kept us going despite never actually seeing said snipe for ourselves.

I don’t really recall how long we spent hunting this poor (completely fabricated) creature through the woods. However, I do remember the disappointment in learning that we’d been duped.

A tradition that dates as far back as the 1840’s in America, snipe hunting is a practical joke in which an unsuspecting newbie is duped into trying to catch a non-existent animal called a snipe. Many of us who grew up prior to social media (Hello all you lovely baby boomers and Gen-exers!) have at one time been a victim of this prank. So it was no wonder that when my Northern bred boss first moved to Virginia, he thought he was also a victim in a somewhat similar scenario. 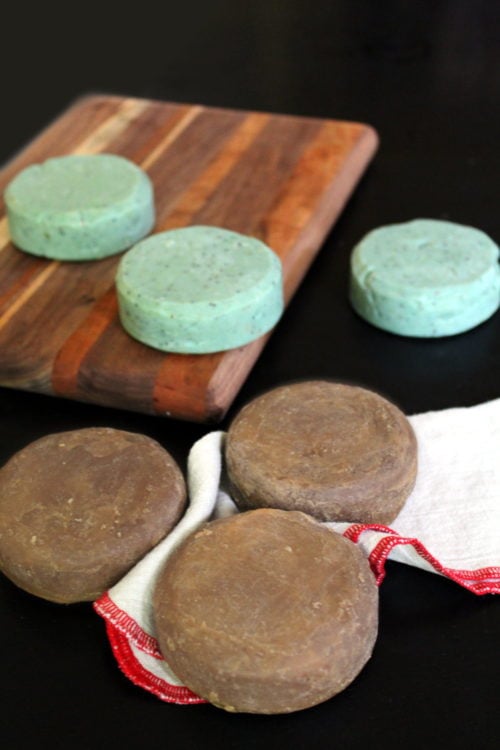 Before I dove into self-employment full time I worked for a small family owned business. The owner and his family were originally from New Jersey. As new transplants to Southwestern Virginia, there are quite a few “cultural” differences between the North and South. My boss at the time, Bill, quickly discovered many of these differences through working with clients. However, one instance in particular was somewhat similar to my own snipe hunting excursion many years back. But this time, in reverse.

While out scouting a potential job site, Bill found himself knee high in a field of tall grasses and wildflowers. Bill’s client immediately warned him of the possibility of chiggers in the weeds. Assuming that chiggers were an imaginary creature – something like that long ago snipe we’d both been tricked into hunting – Bill dismissed the warning. He was absolutely convinced that his client, who was born and raised in the South, was pulling his leg. Unfortunately, he was not.

Chiggers are quite real. It’s also quite possible that they are spawned from Satan. Not visible to the naked eye, these tiny white mites are parasites in their larval stage and live on or UNDER the skin of warm blooded animals. Commonly found in forests and grasslands, chiggers, or trombiculidae mites as they are referred to by scientists, are a relative of ticks.

In addition to red, pimple like bumps and hives chiggers leave behind, they also cause the most horrendous itching EVER. It is not a pleasant experience. So in fact, in Bill’s case, a Northerner had not been duped by a Southerner. Rather Bill’s client had given him fair warning and Bill paid the price for his disbelief.

Chigger bites are most common in late spring, summer and early fall when the temperatures are between 77°F and 86°F. As the parasitic larvae don’t fly, they tend to stick together in large clumps on low lying grass and leaves. As a person or animal walks by, chiggers then attach themselves to their next warm blooded meal. Chiggers then use their claws to make tiny holes in skin. Then they inject their saliva into the hole they create in order to liquify and feed off of skin cells.

The resulting itching and dermatitis from chiggers lasts for several days. And it’s extreme enough that it can keep you from sleeping. Healing then occurs within one to two weeks. 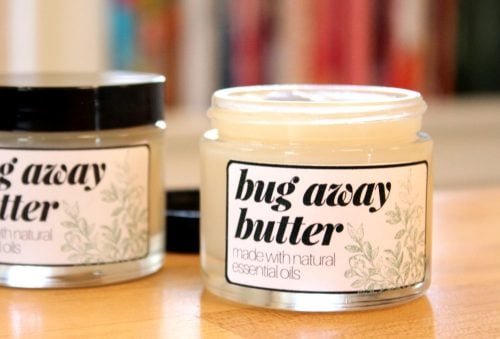 How to prevent chiggers.

The top essential oils for a chigger repellent spray include citronella, tea tree, geranium and lemongrass essential oils blended in jojoba oil. I recommend using three drops of each of these essentials oils per ounce of jojoba oil if you’d like to craft your own chigger repellent. Simply combine each of these ingredients together combined in a large roller ball bottle. Alternately, you may also want to try to my natural insect repellent body butter recipe which also contains anti-parasitic neem oil.

Should you one day, like Bill, find yourself knee deep in not so imaginary creatures there is a simple and natural solution. My favorite natural remedy for chiggers is pine tar soap with neem oil.

When used in soapmaking, pine tar works to treat a variety of problematic skin conditions. Pine tar soap is shown to be effective at fighting psoriasis, eczema and dandruff as well as skin inflammation. Additionally, all natural pine tar soap can also be used to soothe and treat the symptoms of poison ivy, oak, and sumac. It also relieves the itching caused by bug bites – and chiggers.

As I wanted to formulate an all natural pine tar soap specifically for skin issues that dealt with parasites, I also used neem oil in my recipe. Neem oil, which research shows has natural anti-inflammatory and analgesic (pain killing) properties, has also been used as an antiparasitic treatment for thousands of years in India. As a natural skin care remedy, it is used topically to reduce the symptoms of common skin conditions such as eczema, ringworm, athlete’s foot, cold sores, psoriasis, warts, scabies, candida, infected burn wounds, slow-healing skin ulcers and even acne.

Combined, pine tar and neem oil create a powerful natural remedy that’s a must for any home apothecary. Not only does my all natural pine tar soap recipe soothe itching and promote healing caused by general skin care concerns, it’s also effective at fighting those not so imaginary creatures that we can’t see, but still exist.

This handmade artisan soap is a must for anyone who enjoys spending time outdoors in the summer! 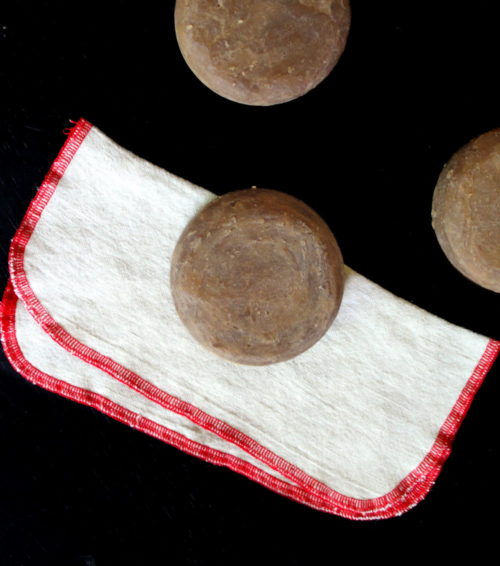 How to Make Natural Pine Tar Soap with Essential Oils

You will start by mixing the lye/water. To do this, measure out the distilled water called for in the recipe into a non-aluminum, heat proof container.

Then, using a digital scale, weigh out the lye. Slowly pour the lye into the water in a well ventilated area. Now stir the lye and water together until the lye dissolves completely.

Once the lye has dissolved, set the lye/water mixture aside to cool.

Next, weigh out the sweet almond, castor, coconut, olive and neem oils. Combine in a non-aluminum pot. Follow with the mango butter, sal butter and pine tar, first weighing out each ingredient, then combining in the pot with the liquid carrier oils.

Heat the soapmaking fats (your carrier oils, butters and pine tar) over low to medium-low heat on the stove until all of the ingredients have completely melted. Then set aside to cool.

While the lye/water and soapmaking oils cool, weigh out the essential oils into a separate glass container.

To avoid having your all natural pine tar soap seize from the additional heat generated during the saponification process from the pine tar, allow both the lye/water and the soapmaking oils to cool to around 80°F.

Once the temperatures of the lye/water and soapmaking oils have come down and are within 10°F of one another, you are ready to make my all natural pine tar soap.

Add the essentials oils to the pot of soapmaking oils. Then mix with a stick blender to combine.

Now pour the lye/water into the soapmaking oils. Mix either on low with a stick blender or by hand (recommended) as the soap will quickly reach trace. (If your soap seizes, don’t worry. Mix it by hand until the soap gels, then mix again and spoon into your mold.)

Once the all natural pine tar soap traces, pour the pine tar soap batter into your mold. (I used this round silicone mold and was able to make six bars.) 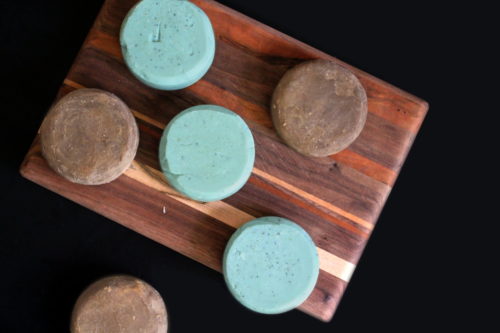 Set the soap aside. After 24-48 hours, unmold your all natural pine tar soap. Then allow your soap bars to cure in a cool, dry location for four to six weeks. 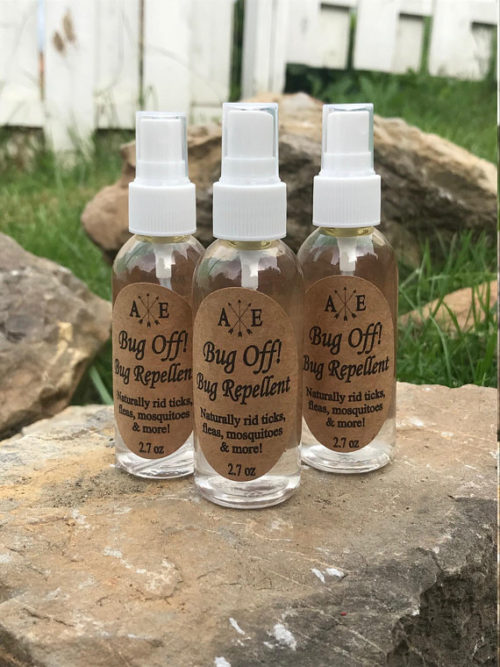 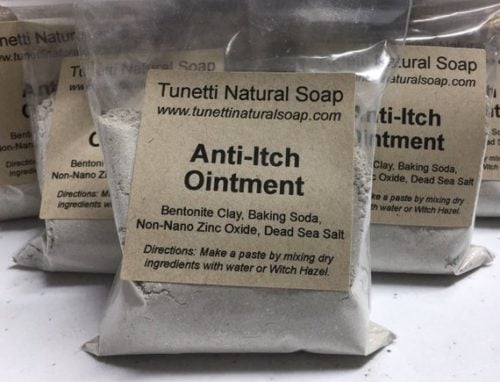 Or to soothe and calm itching from insect bites you already have, try this natural anti-itch ointment from Tunetti Natural Soap. Formulated with bentonite clay, baking soda, non-nano zinc oxide and Dead sea salt, this effectively stops itching caused by chigger and mosquito bites as well as poison ivy, poison oak and poison sumac. Simply mix the dry ingredients with water or witch hazel for a simple, natural home remedy.