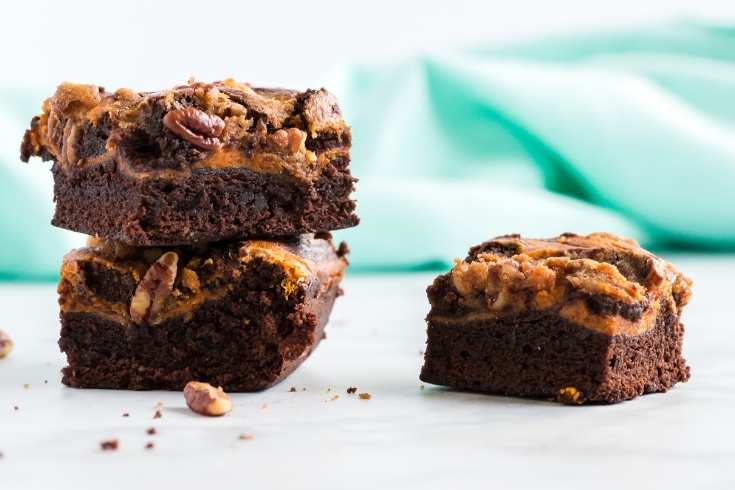 Learn how to make pumpkin cheesecake brownies recipe with pecan streusel topping is a delicious fall dessert idea. These tasty brownies are made using box mix and are a delicious treat for anyone who loves pumpkin spice! 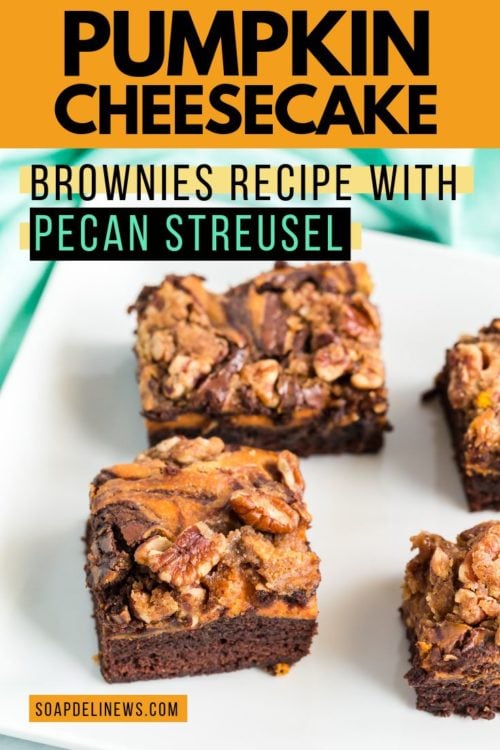 There’s no harm, no foul indulging in a treat from time to time. And brownies are my jam. With the fall harvest in sight and pumpkins popping up everywhere, it’s hard to resist whipping up these pumpkin cheesecake brownies!

I’ll admit that I really don’t eat desserts very often. I cut out most sugar from my diet some time back. After learning that sugar causes inflammation, the last thing I wanted to do was make my body hate me more than it already does. While the fibromyalgia is mostly under control these days, there’s this mid-life hell called perimenopause. As it slowly causes an evolution that requires an equivalent of 1980s mom jeans, I’ve really tried to avoid empty calories. Meaning desserts. Two giant servings of macaroni and cheese. 500 calorie coffees from Starbucks. An entire pint of Ben & Jerry’s. 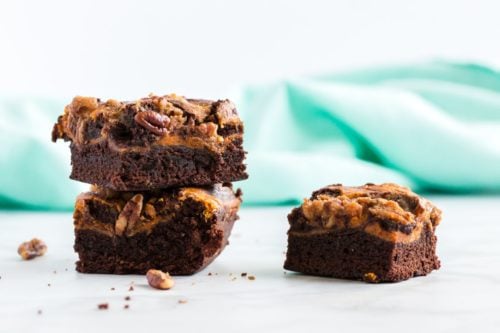 Unfortunately my backside is insisting on repositioning itself on the other side of my body. Prominently in the middle where it’s impossible to hide. The only plus is that, as my chin has started slink down from my cheeks, some of it seems to have given my chest a bit of extra abundance. I won’t even go into the bloating. Still, I’m not a complete masochist. There are days when self care absolutely requires something to satisfy my sweet tooth. Brownies are my go to. While I prefer them with icing so they look more like a birthday cake than a pan of brownies, swirling in cheesecake is actually crazy delish and doesn’t make my teeth ache thinking about it.

These pumpkin cheesecake brownies are easier to make than you might imagine. Start with a box of your favorite brownie mix (I opt for chewy and extra fudgy) and throw in some canned pumpkin, cream cheese and everyone’s fall favorite – pumpkin spice! Then top it all off with some pecan streusel and you’ve got yourself a dessert worthy of the season! 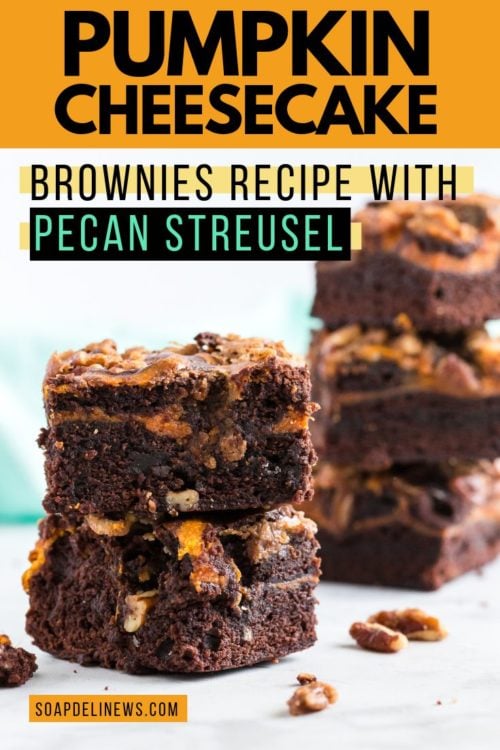 1 Box brownie mix, made according to package directions

For the Pumpkin Cheesecake Layer:

For the Pecan Streusel Topping:

How to Make Pumpkin Cheesecake Brownies with Box Mix:

You’ll need either a 7×9 pan or an 8×8 baking pan to make these pumpkin cheesecake brownies. Start by lining your pan with parchment paper. Alternately, you can also spray the pan with a non stick spray. Begin by preheating the oven as directed on the box of brownie mix.

Now prepare the brownie mix according to the package directions. Then pour the batter into your prepared pan, reserving ½ cup of the brownie batter for later. Set both aside. 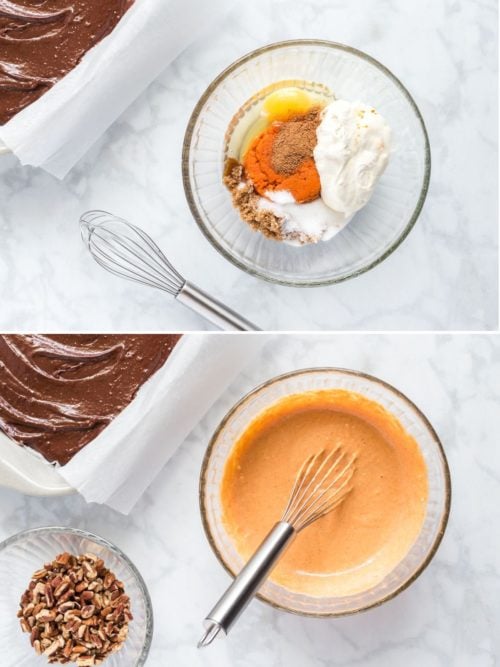 Next, mix together the ingredients for the cheesecake layer (cream cheese, pumpkin, sugars, egg and pumpkin pie spice) in a small bowl.

Now pour the cheesecake batter over the brownie batter in the pan. Then smooth out the batter. 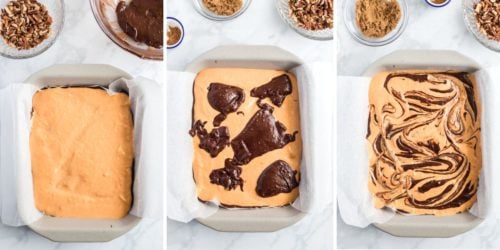 Drop the reserved ½ cup of brownie batter by the spoonful over the cheesecake layer, then gently swirl the two layers with a spoon or spatula. Be sure not to over mix. You simply want to create swirls. 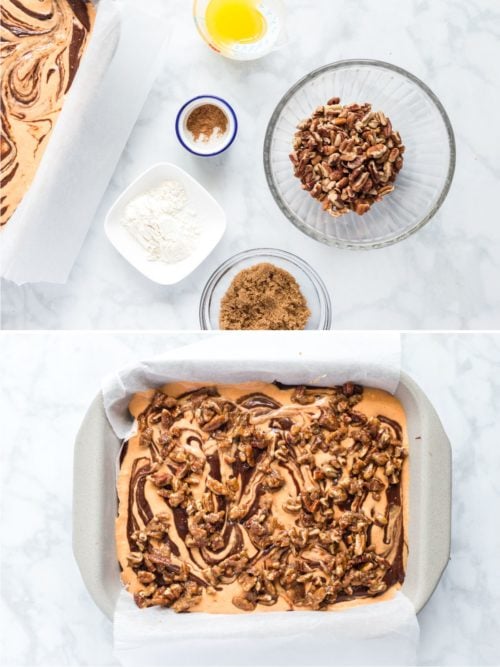 Next, make the streusel topping by combining the pecans, brown sugar, flour, melted butter and pumpkin pie spice in a small bowl. Then sprinkle streusel mix on top of the brownies. 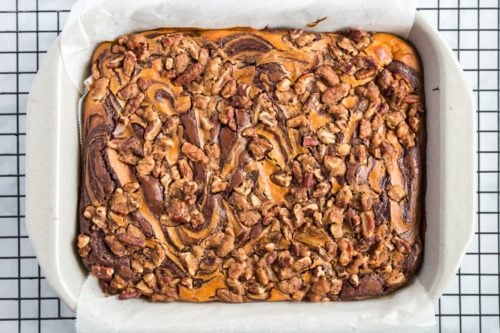 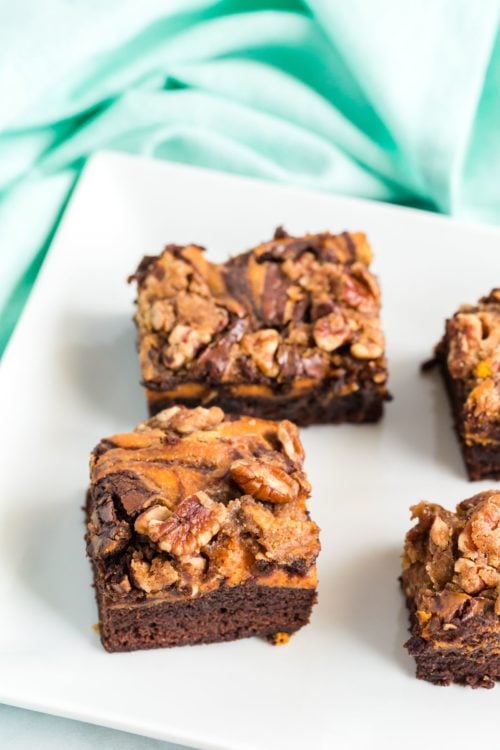 Once cooled, cut the brownies into bars and serve. Store any leftovers in an airtight container.

For the Pumpkin Cheesecake Layer

For the Pecan Streusel Topping

How to Make Pecan Streusel Topping 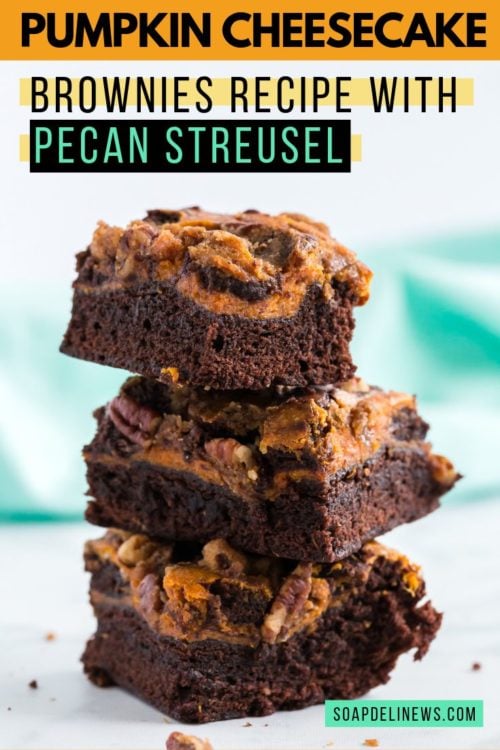 Love my pumpkin cheesecake brownies recipe? Be sure to pin it to your dessert recipe Pinterest board! 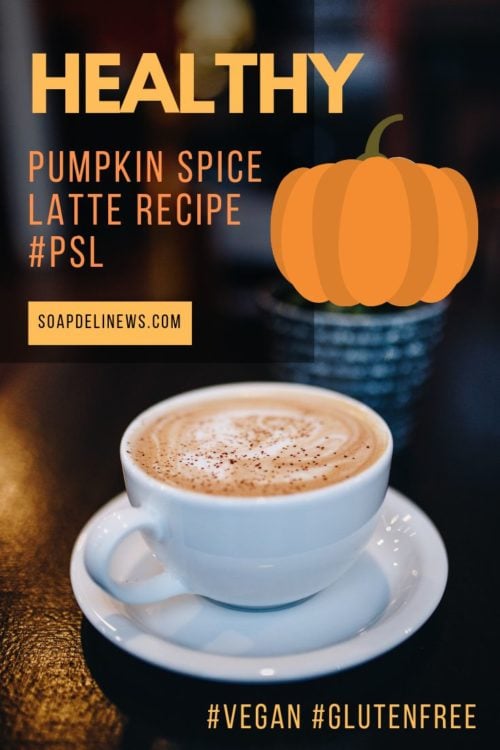 Can’t get enough pumpkin spice this fall? Then absolutely try my healthy pumpkin spice latte recipe! It’s dairy and gluten free and only 76 calories per serving. Or try my delicious, natural brown sugar drop cookies for another easy dessert idea.