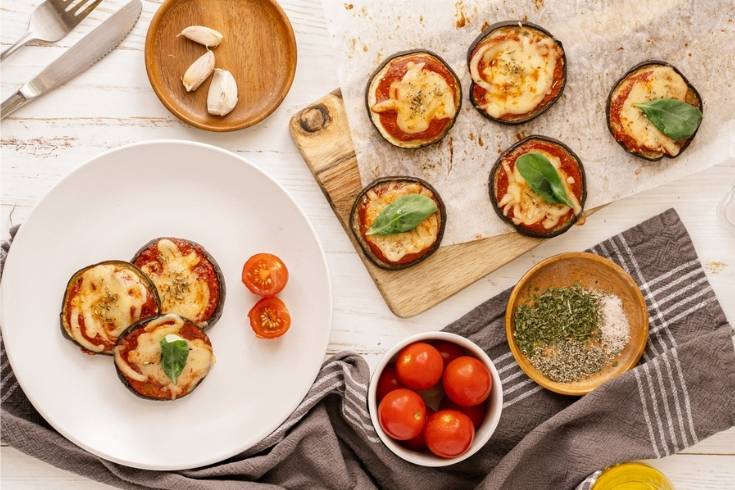 Learn how to make Margherita pizza with eggplant and basil. This low carb pizza is both vegetarian and low in calories. So it makes a healthy weeknight dinner idea for the whole family. And, since it uses sliced eggplant as the pizza base, each family member can create their own mini eggplant pizzas with their own toppings for a kid-friendly meal. Keep reading to discover how to make your own healthy pizzas using eggplant instead of pizza crust.

There’s just something special about pizza night. Pizza is one of the few foods that nearly everyone loves. With several toppings to choose from, you can create unique and delicious flavor combinations so pizza night never gets boring.

This eggplant Margherita pizza is a low carb pizza made with eggplant instead of a flour crust. It’s also low calorie, so your family can enjoy pizza night more often. This recipe is for a basic Margherita pizza with eggplant, but I also have several options for you to create your own varieties. You’ll also find cooking tips and nutrition information for this eggplant recipe below.

What is on a Pizza Margherita?

Margherita pizza is a Neopolitan pizza. This type of pizza is traditionally made with San Marzano tomatoes, fresh basil, mozzarella cheese, olive oil and salt. A pizza margherita is similar to a Caprese salad, so I buy the ingredients and make both in the same week to reduce waste.

Typically, a pizza Margherita is made with a chewy crust similar to a pizza. However, I lightened it up by making Margherita pizza with eggplant and basil instead of a flour based crust. This makes it low carb and adds more nutrients to your diet. 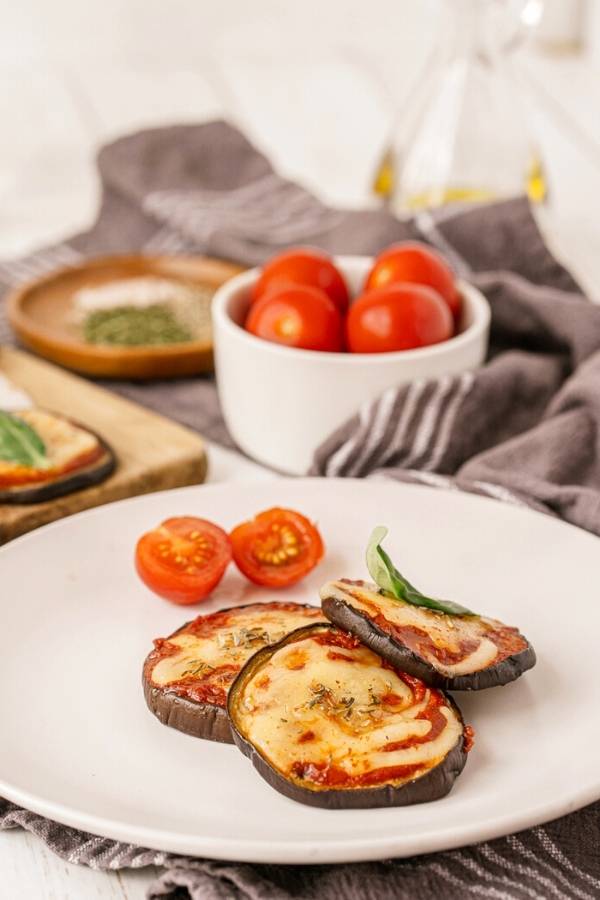 This eggplant Margherita pizza has the same toppings as a traditional pizza Margherita. The only difference is that I use sliced eggplant for the base in place of a crust. 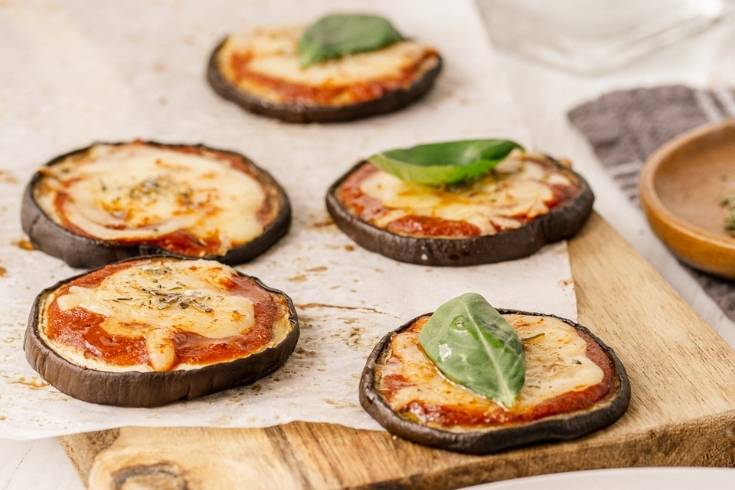 Can I Eat Pizza On a Low Carb Diet?

With so many of us trying to cut carbs, the first thing to go is often bread. However, that doesn’t mean you can’t eat pizza on a low carb diet. By making a pizza with eggplant instead of bread for the crust, you can still enjoy pizza without having to cut out one of your favorite foods. If you follow a keto diet, then you know that the fiber from the eggplant will negate some of the carbohydrates as will the fats from the cheese.

Simply mix up the toppings on your pizza with your favorite ingredients and flavors to make the pizza your own and get the balance you are seeking.

Yes, eggplant Margherita pizza is low carb. One serving of eggplant is 1 cup, which has 5 grams of carbs with 3 grams of fiber. I also used low carb foods for the toppings, including mozzarella cheese and tomato sauce. 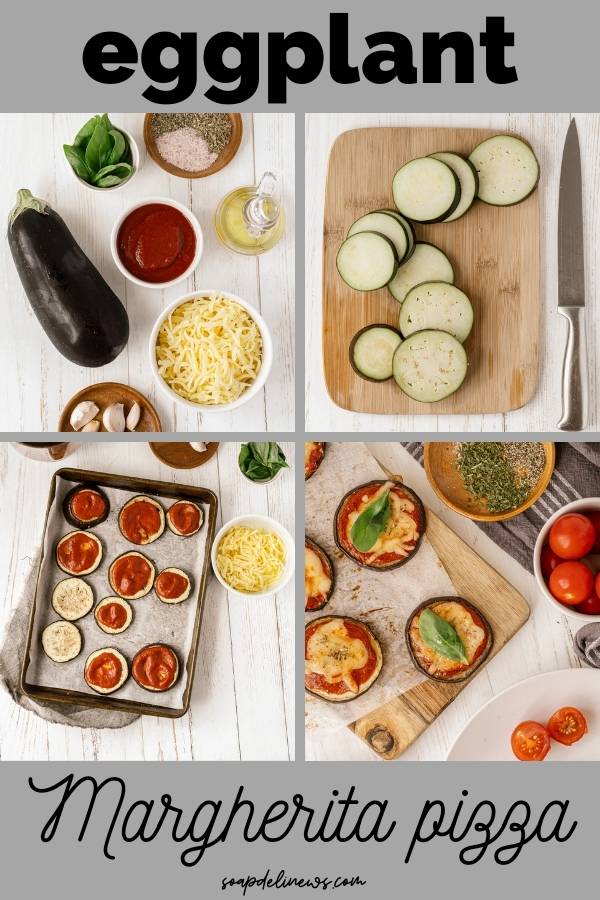 Here are some tips for making eggplant Margherita pizza: 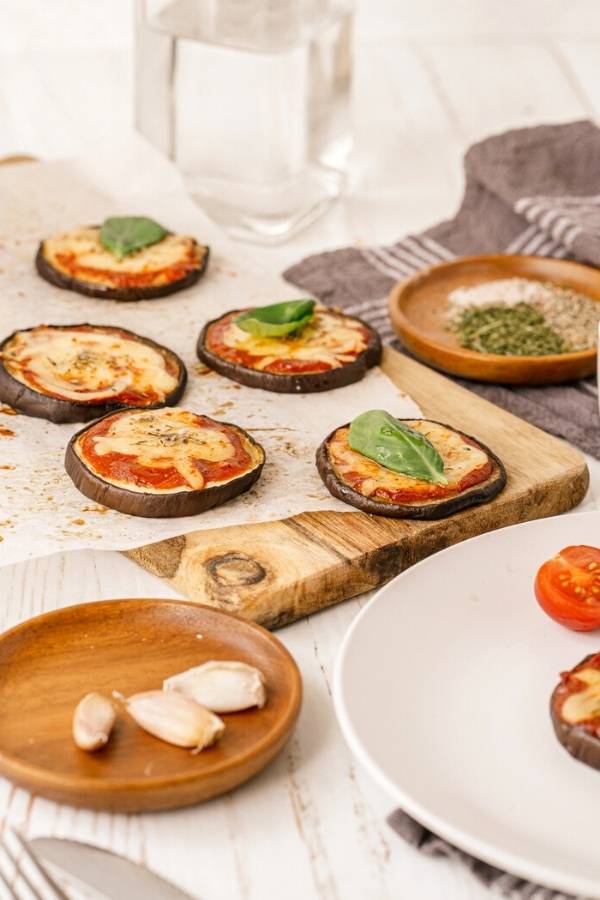 This low carb pizza recipe is a base recipe, and you can definitely make it your own. Try one of these variations for Margherita pizza with eggplant:

Can You Freeze Eggplant?

You can freeze any leftover eggplant slices to make Margherita pizza with eggplant later. To freeze eggplant slices, slice them and place on parchment paper on a baking sheet. Then bake as directed in the recipe but let them cool and do not add the toppings.

When they’ve cooled completely, place the baked eggplant slices in a freezer bag separating them with wax paper so they don’t stick together. Eggplant slices will freeze for up to 6 months. Then let thaw, add toppings and finish baking as directed below. 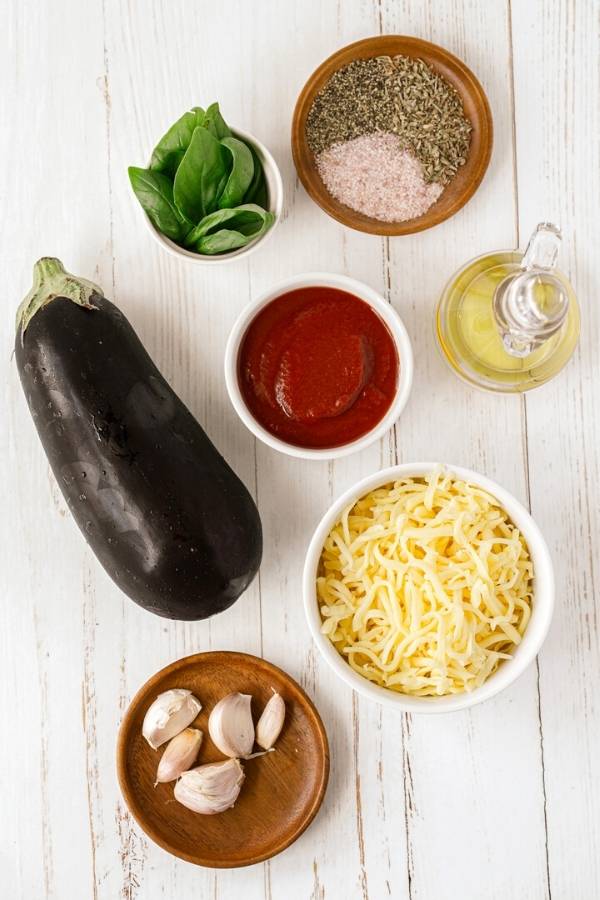 To make Margherita pizza with eggplant and basil, you will need the following ingredients: 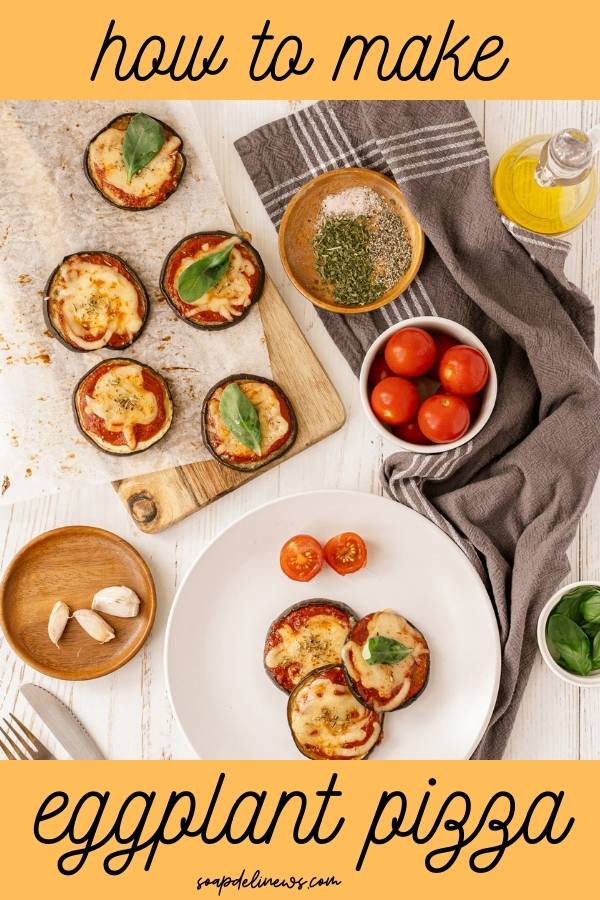 How to Make Margherita Pizza With Eggplant

1. To make this low carb pizza, begin by preheating the oven to 400 degrees Fahrenheit. 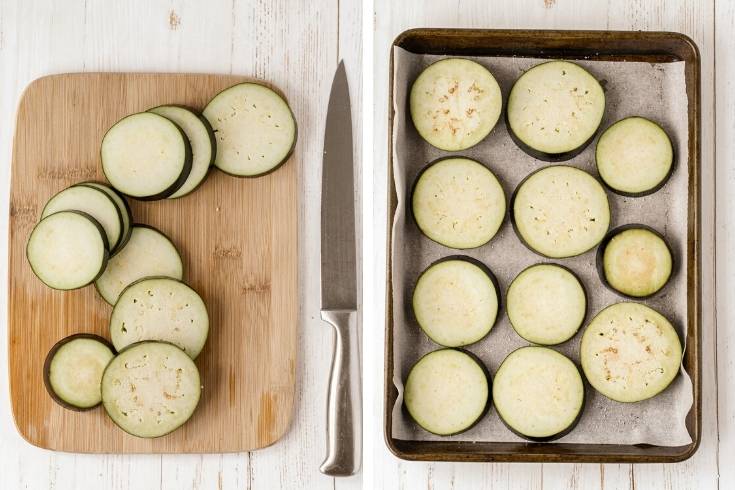 2. Next, remove the top and the bottom from each of the eggplants. Slice the ripe eggplants into ⅓ inch thick slices.

4. Then bake the eggplant slices for about 20 minutes, or until they start to soften and turn dark brown. 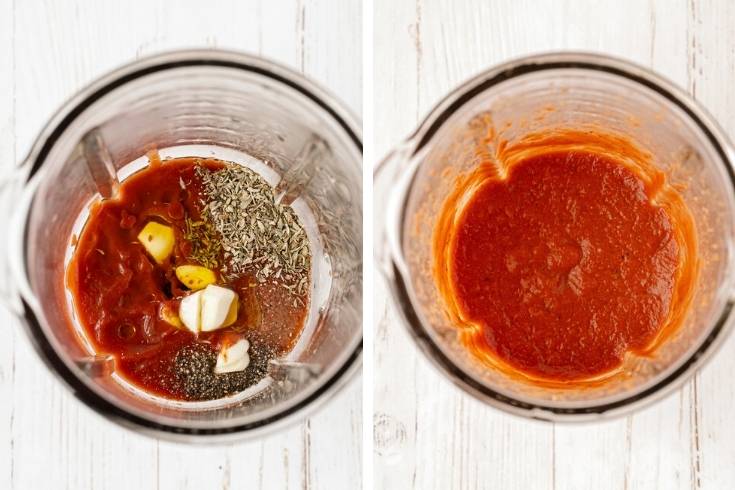 5. Next, place tomato sauce, garlic cloves, oregano, olive oil and ½ teaspoon salt to a blender. Blend the ingredient together for one minute until smooth. 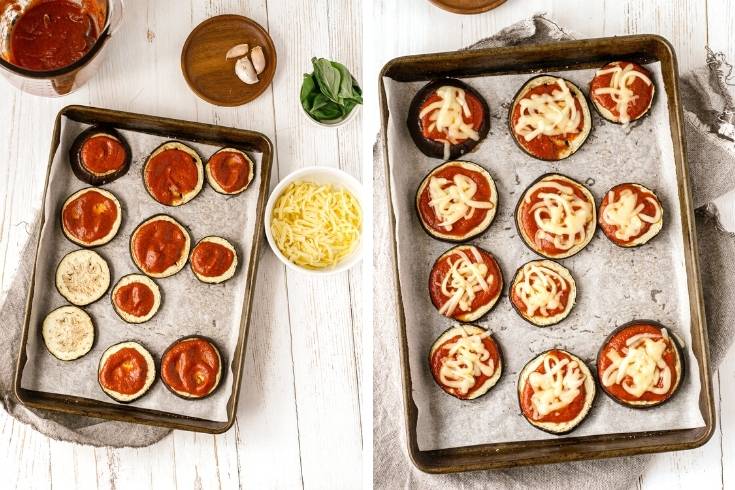 6. Remove the eggplant from the oven once it is softened. Then top each slice with one tablespoon of the tomato sauce and one tablespoon of mozzarella cheese. Bake the mini pizzas for an additional 5 minutes, or until the cheese is melted. If desired, the kids can also add their own fun toppings to make this a kid-friendly recipe.

7. Once the cheese melts, remove the mini eggplant pizzas from the oven. Then garnish them with fresh basil. 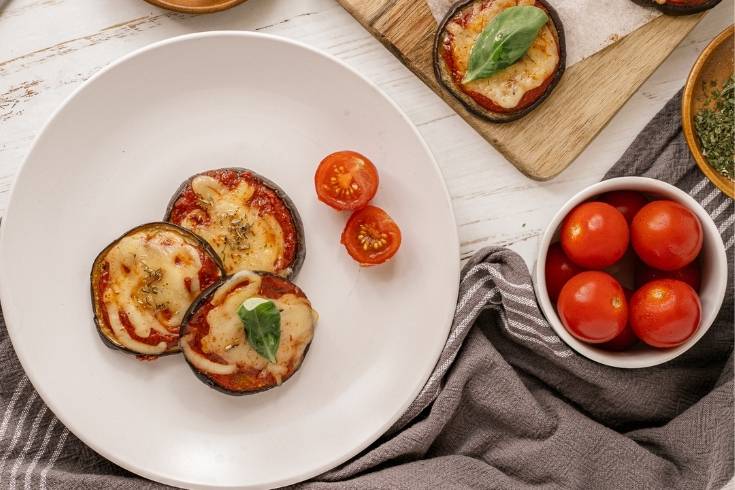 8. Serve your mini pizzas immediately for the best flavor.

How to Store Leftovers

You can store leftover margherita pizza with eggplant and basil in the fridge for up to 4 days.

If you enjoyed this vegetarian dinner idea, then be sure to check out my other low carb recipes. Or try my baked eggplant recipe with chili lime seasoning as a healthy side dish for summer.