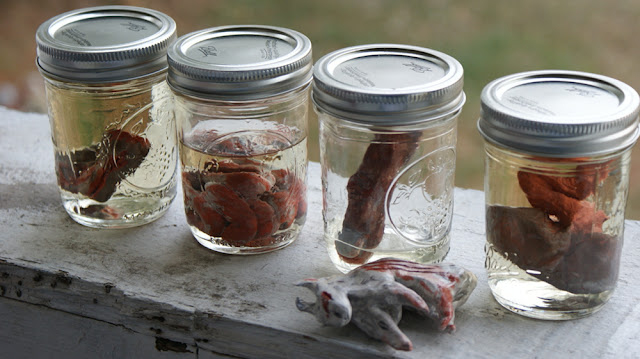 I loved the first season of American Horror Story which airs on FX. Although I did find the final episode of Season One to be a bit lacking and a disappointment. Unfortunately I haven’t been able to watch the second season as I don’t have satellite or cable television – much less a working tv at this point – and am not quite committed enough right now to buy a Season Pass via Amazon.

However, I did think it would be fun to create some of my own creepy preserved jars full of body parts that you see in the basement in the opening credits during Season One. Yes, it’s a tad perverse, but I also thought it would be a fun change up from pretty soaps and beauty recipes. My son and I did this project together and had a blast making it. And who knows, these jars could come in pretty handy right around Halloween. 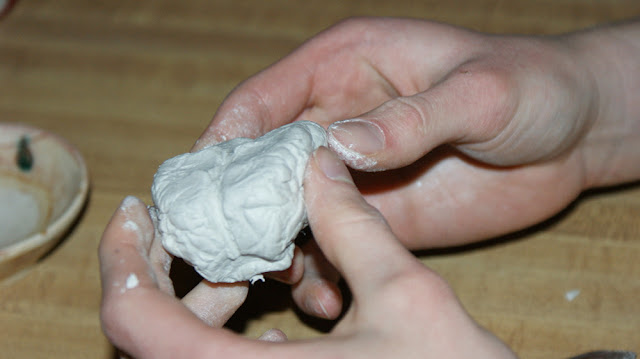 We used White Das Air Hardening Clay for this project. I’d never used this type of clay before – I was going for whatever I could get that gave me the most bang for my buck – and did find it a little dry. It’s similar to what you might use on a pottery wheel, so I treated it as such and just kept a small container of water on hand to moisten the clay as I needed to. (If you’ve never thrown pottery on a wheel before, it’s commonplace to keep a bucket of water beside the wheel as the clay dries out as you work with it.) 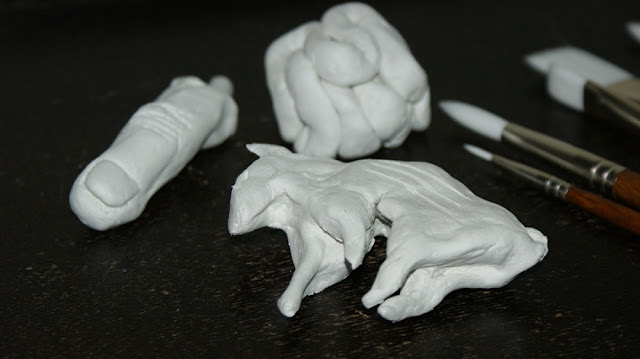 We molded the clay into different shapes – something similar to intestines, a finger, a stomach, a rat, and an alien type leech fetus thing that my son came up with. We then set the clay aside to dry for 24 hours. Halfway through we turned the sculptures over so they would dry more evenly. 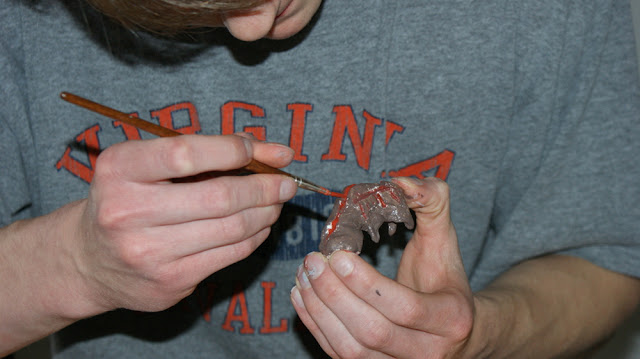 Once the sculptures had dried, we painted them with acrylic paints. Since we were going for dead, preserved body parts we stuck to the colors white, gray, black, brown, and red. I already had some white paint on hand, so we simply bought black and brown and mixed them to get different shades. For the dark reds, I mixed some red iron oxide I had on hand in with the white paint. 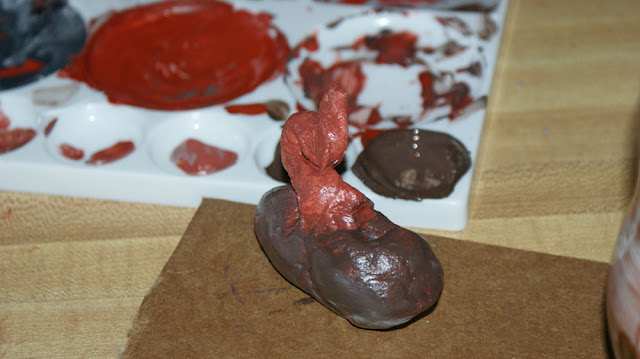 Once we painted the sculptures we set them aside to dry. They actually dried fairly quickly which was nice. It seemed like the clay sort of sucked the moisture out of the paint so we were able to handle them in short amount of time in order to paint all of the sides. Pictured above is Cody’s stomach organ, which we thought sort of also looked like a kidney. But we weren’t really going for accuracy since this project was for fun. 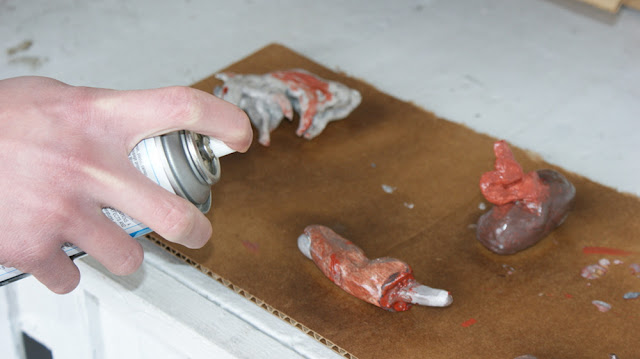 Once the painted had dried we sprayed the sculptures with a clear acrylic sealer on all sides. We gave them two coats since we planned on immersing the final product in liquid. 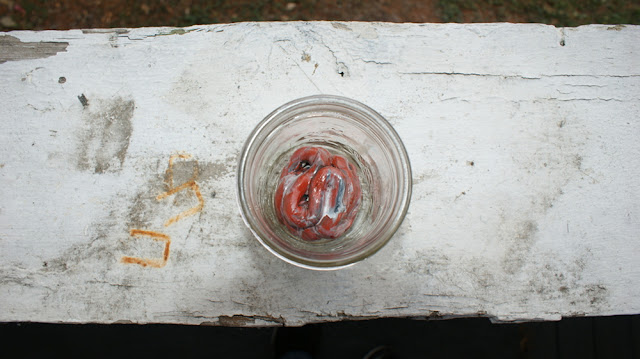 Once the acrylic sealer had dried, we placed the faux organs into Ball Canning jars. I bought the half pint jars from the grocery store since they cost less although I would have liked to have a mix of both. Our rat wouldn’t fit into the smaller canning jars, and we didn’t want to make him smaller and risk ruining him. If you don’t want your sculptures floating or moving around – or just want one particular set view – you can glue them into the jar using E6000 glue. 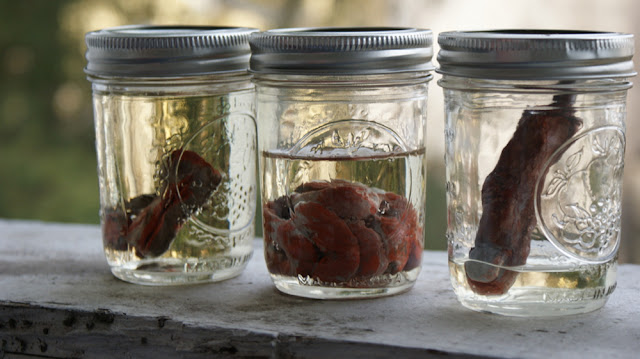 Cody and I played around with different liquids to use for the formaldehyde. In the end, we settled on a white wine that had been sitting opened, but corked in my fridge for the past two months. It looked great and gave just the effect we were looking for. However, if you don’t have any wine in need of dumping you can usually find really cheap wine at the grocery store. I’ve seen wine for $3-$4 a bottle. 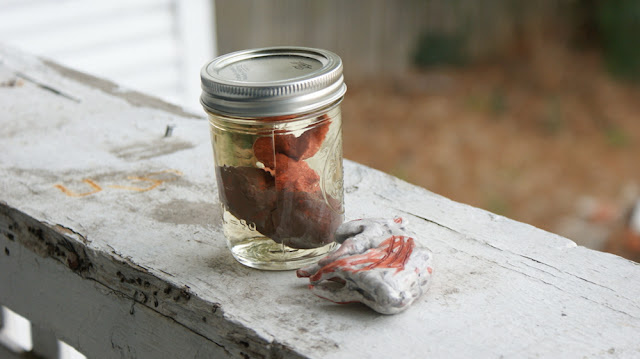 Next, you would simply fill your mason jars with wine to the level of your liking. You can fill them up to the top or half way. We varied our wine levels for visual interest. All that’s left is to tightly screw the lids onto the jars. 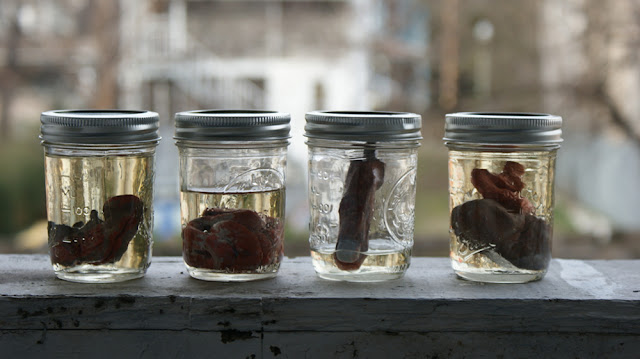 Cody and I were pretty pleased with the end result. Our jars looked super creepy down in my basement which is half brick wall – no insulation – and half dirt dug out from under the house. (My apartment is the lower level of a house that’s over a hundred years old.) Since there’s no type of heating or cooling in the basement – it has a separate entrance from the house – the wine works perfectly since it’s less likely to freeze and risk damaging the jar or sculpture from the expansion. 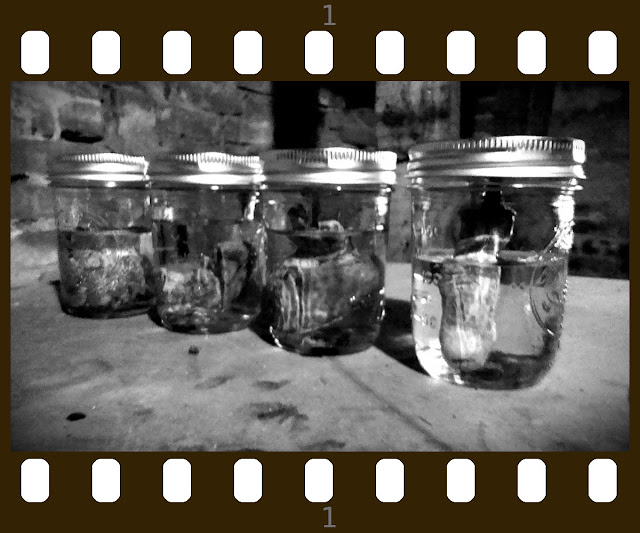 Here’s a grainy black and white of the jars in my basement – taken via my camera phone. If and when I move, I think it’d be a lot of fun to leave these in the basement just for that – what in the $#@! is this?! – shock factor. All in all, this definitely made for a fun family project.

So, for other American Horror Story fans, how is season two? Is it worth a season pass or I should I wait for it to come out on dvd or Netflix?