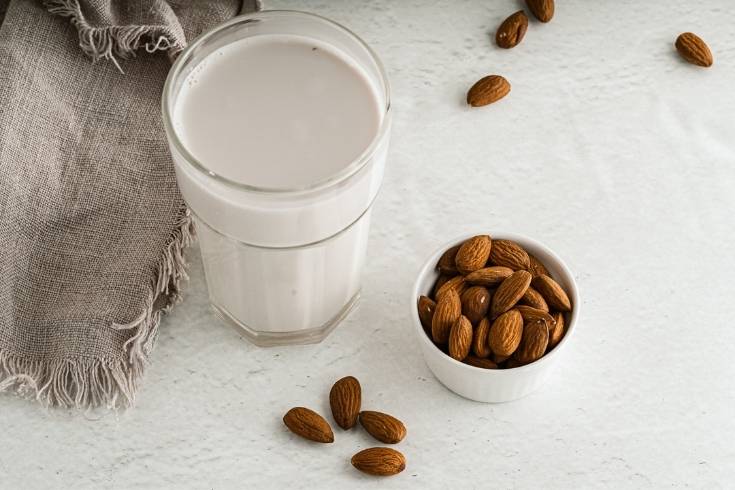 Learn how to make almond milk at home and discover almond milk benefits. This homemade nut milk recipe is easier to make than you might think, and you can save a lot of money by making your own. This healthy drink requires just two ingredients and there’s no added sugar. As homemade almond milk has healthy fats compared to cow’s milk, it makes a great dairy free alternative for drink recipes and baking, as well as in homemade coffee creamer recipes.

Many years ago, I noticed that too much dairy makes my eczema flare up. As a result, I gave up milk entirely. I’ve since switched to drinking only plant based milk. Cow’s milk also causes inflammation in my body, which isn’t good, especially when you suffer from fibro like I do. Too much milk can cause a pain flare, which renders me useless for a few days.

Almond milk is a popular cow’s milk alternative because it has a creamy texture similar to milk. It also has a slightly nutty flavor that compliments most dishes and a number of nutritional benefits. Almond milk can be purchased in a variety of flavors including unflavored, vanilla or chocolate. This makes this homemade nut milk perfect for a wide variety of drinks and baked goods.

Since I use mainly almond milk in my recipes, I wanted to learn how to make creamy almond milk to save money. I also like having a homemade almond milk recipe on hand. It means I don’t have to make a trip to the store just for more milk. I can simply make this homemade nut milk recipe when I need more.

It’s important to note that when you learn how to make your own nut milk, the almonds do need to soak for at least 8 hours. I let mine soak overnight for more like 12 hours, but you’ll definitely need to plan ahead to make this homemade almond milk recipe. Once the nuts are ready, it only takes about 15 minutes to make your own plant based milk.

Keep reading for answers to common questions on how to make your own nut milk and to discover homemade almond milk benefits. 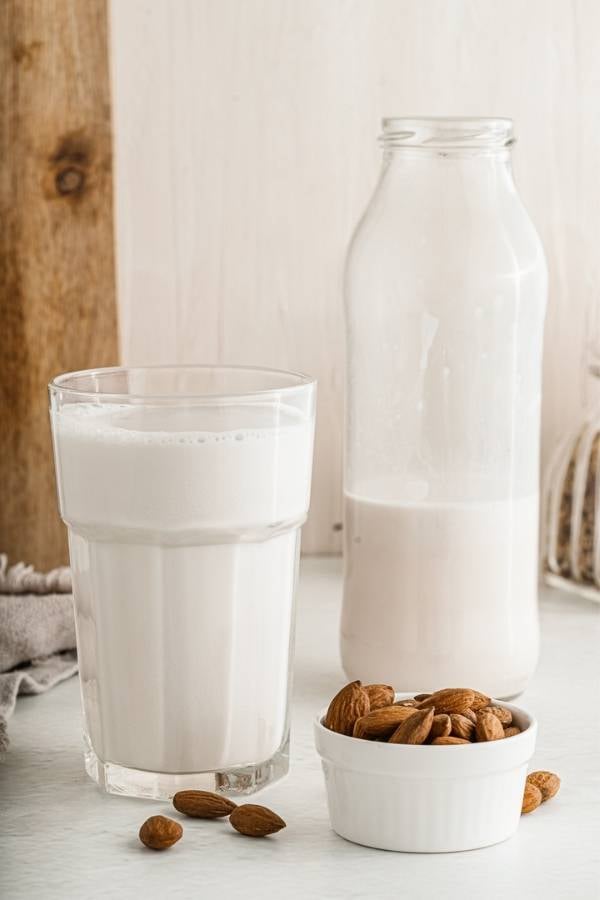 Is it Cheaper to Make Your Own Almond Milk?

Learning how to make creamy almond milk can save you money, but not necessarily. It depends on the price of almond milk in your area and the price of almonds. It is cheaper for me, but ultimately it depends on the costs at your local grocery store. In addition, when getting started, you’ll also need to make a one time purchase for a nut bag and a blender. If you already have a blender, then the cost for the reusable nut bag will be nominal.

Almonds can be stored for up to a year, so I buy several months worth when they are on sale. I store them in the freezer to extend their shelf life. This helps offset the cost. Therefore, my homemade almond milk recipe is cheaper than buying almond milk from my local grocer.

How Long Does Nut Milk Last?

Your homemade almond milk recipe will last about 4 to 5 days when stored in the refrigerator.

If the milk sours before then, make sure you sterilize your equipment and run your jars through the dishwasher on the sanitize setting. You can also pour boiling water in them.

How Many Calories Does Almond Milk Have?

This homemade almond milk recipe has about 50 to 60 calories per 8 ounce serving. That’s about half of the calories of cow’s milk. In addition to being a low calorie food, almond milk also has a number of nutritional benefits that make it a great choice for natural health and wellness. 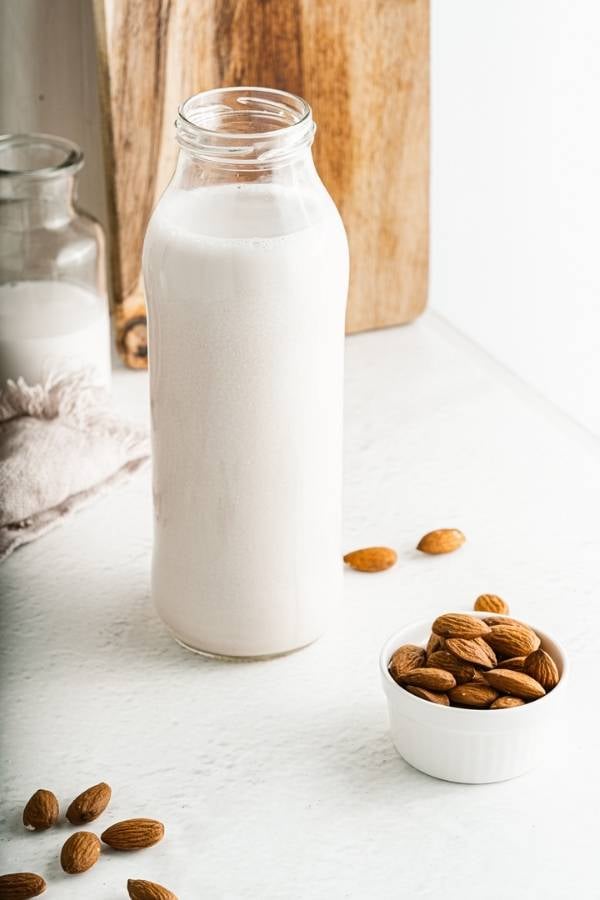 Not only does learning how to make almond milk at home save you money, but almond milk has nutritional benefits too.

There are other homemade almond milk benefits. This healthy drink recipe is also lactose free, vegan and dairy free. Lactose intolerance can affect up to 75 percent of people, and learn how to make your own nut milk can provide an alternative. 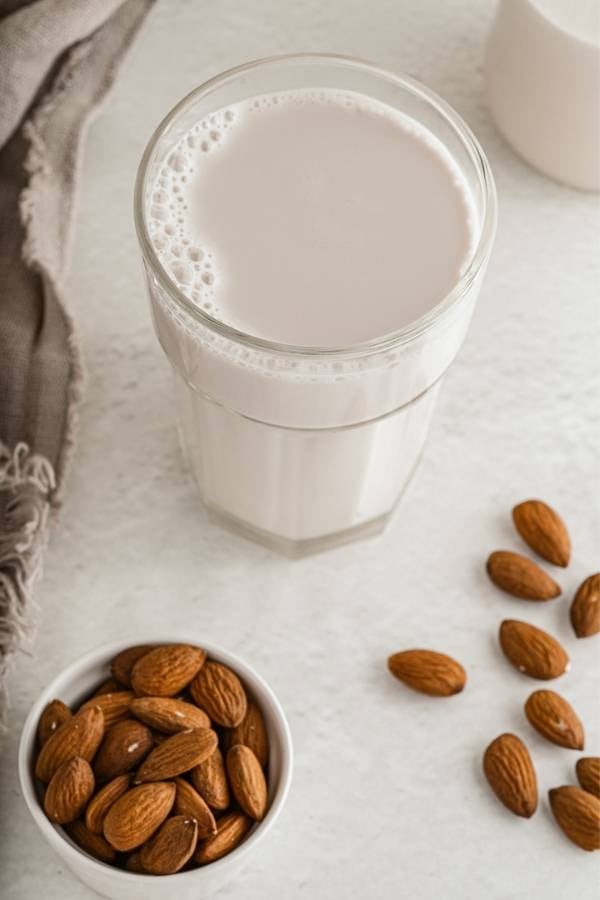 If you are following the keto diet, then you will probably want to learn how to make creamy almond milk. Unsweetened almond milk is low in carbs with about 2 grams of carbs per 8 ounce serving.

How to Make Plant Based Milk Taste Better

If you don’t like the taste of almond milk, there are several ways to make almond milk taste better. You can add the following ingredients to your homemade nut milk recipe to improve the taste: 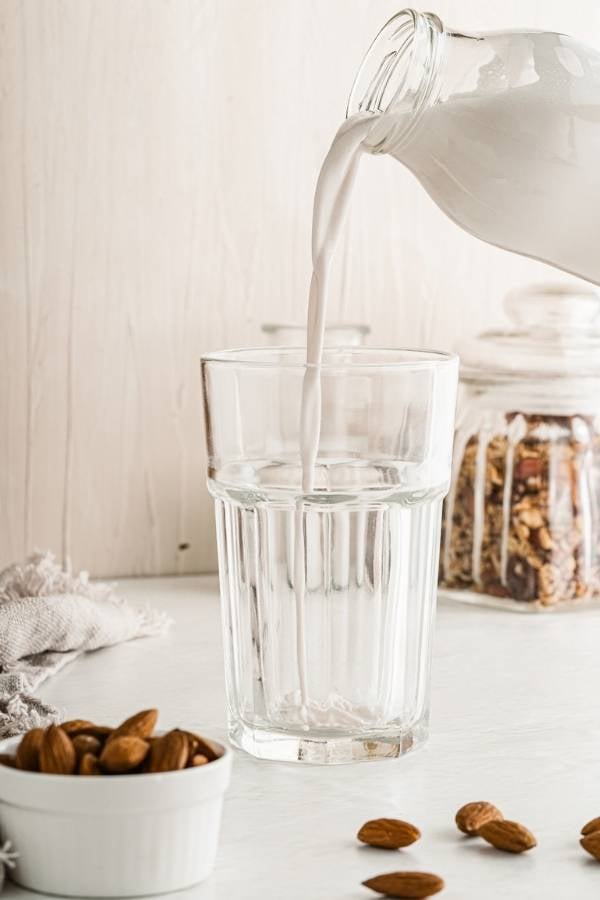 How to Make Plant Based Milk Thicker

When you learn how to make your own nut milk, it can be quite thin compared to store bought nut milk. If you want a thicker plant based milk, you can make it thicker by following these steps: 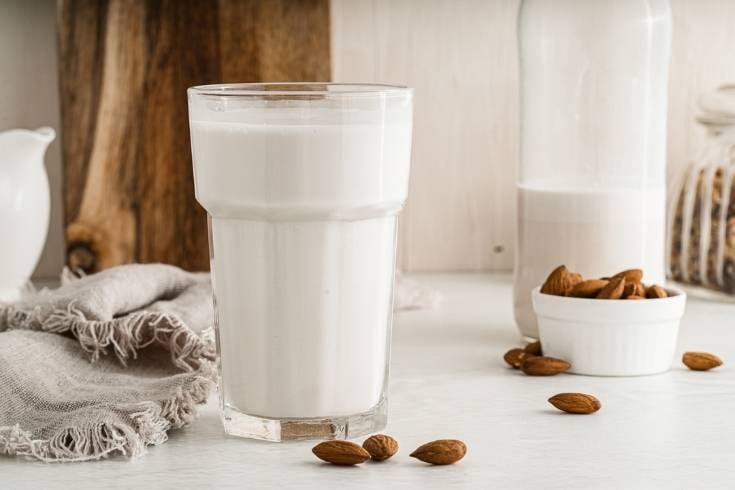 Can I Freeze Nut Milk?

How Many Almonds Do You Need to Make a Cup of Almond Milk?

How Do You Make Almond Milk Without Soaking the Almonds?

Soaking the almonds also gives you a higher yield with less of the nut pulp being wasted. The water activates enzymes in the nuts to make the homemade nut milk recipe have more nutrients.

Why is my Homemade Almond Milk Separating?

Homemade almond milk can sometimes separate, which can be frustrating when you learn how to make creamy almond milk. Almond milk is made from both oil and water, so it doesn’t mix. The blender helps emulsify it so it stays together.

If your almond milk separates, it’s still fine to use. You can either blend it again to try to get it uniform, or you can shake it just before using. 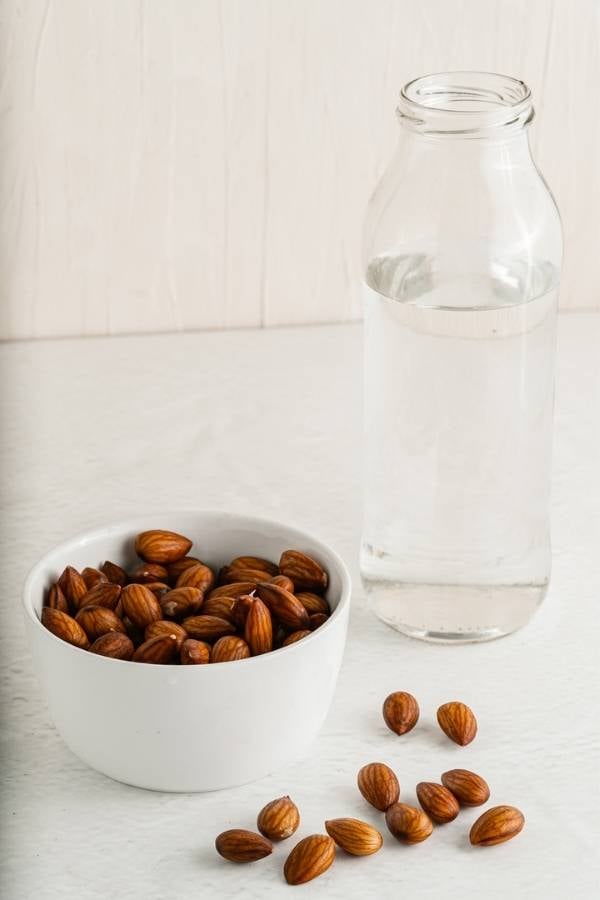 To learn how to make almond milk at home and enjoy almond milk benefits, you will need the following ingredients: 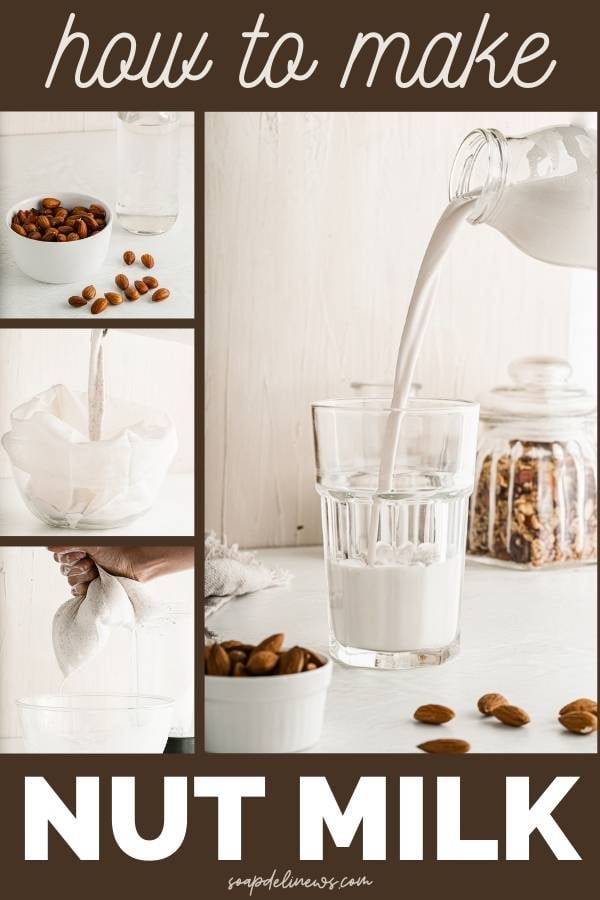 How to Make Nut Milk with Almonds at Home

Here is how to make a homemade nut milk recipe:

1. For this recipe, you will need a nut milk bag or a cheesecloth bag to filter the almond bagasse. Soak the almonds ahead of time in warm, filtered water for at least 8 hours. Is it okay to extend that time up to 12-14 hours, if you prefer to let them sit overnight.

2. After the almonds have soaked in water, clean and drain the almonds. Then place them in a blender with three cups of filtered water. 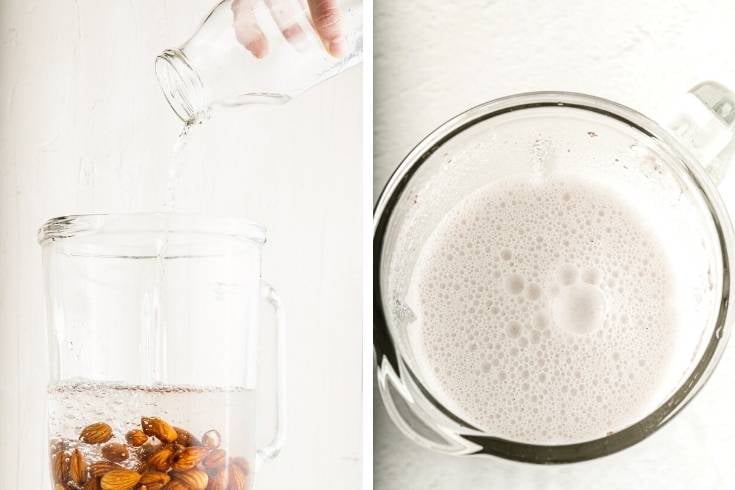 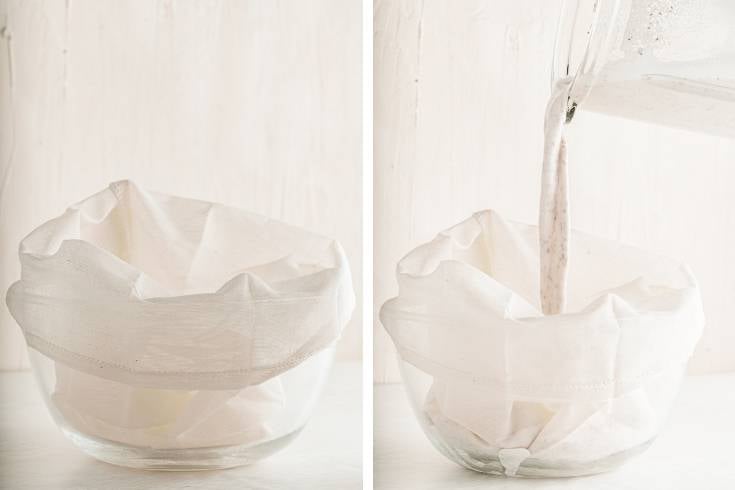 4. Next, grab the nut milk bag and open it over a deep bowl or jar. You want to be able to easily pour all the almond milk into the bag. 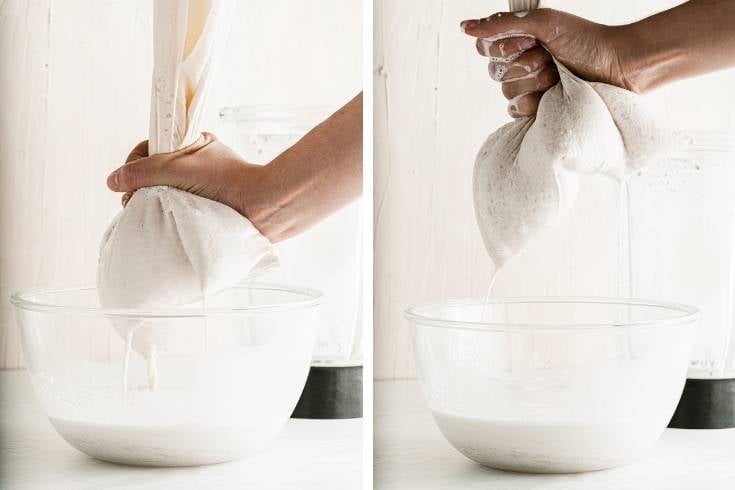 5. Now pour the liquid and almond mixture into the nut milk bag. Then gently start squeezing the liquid out. Press until all the liquid is released from the bag. 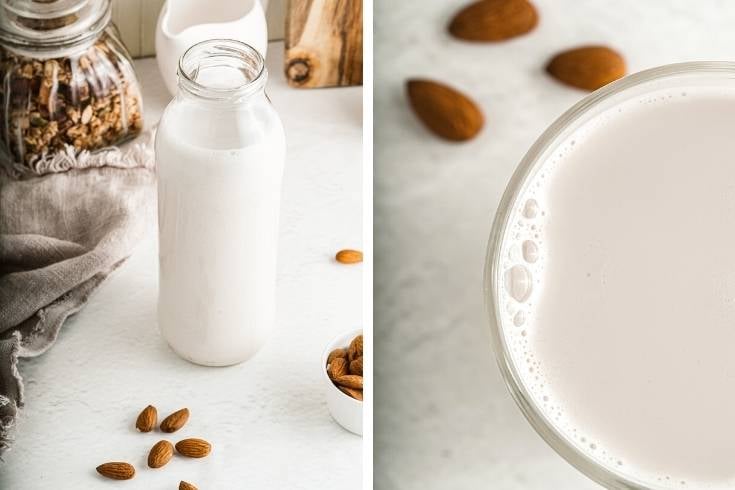 Once made, you may store your homemade almond milk in the fridge for up to 4 days.

When using 3 cups of water to make this nut milk, the result is a creamy almond milk that is well suited for lattes, smoothies or other vegan products like almond ricotta or mozzarella. However, if you prefer a thinner plant based milk, simply add one or two more cups of water until you find the perfect consistency to meet your needs.

You can save the leftover pulp from this nut milk to make almond flour or to use in cookie recipes.

Shake the almond milk prior to each use.

This homemade almond milk recipe can be stored in the refrigerator for up to 4 days. 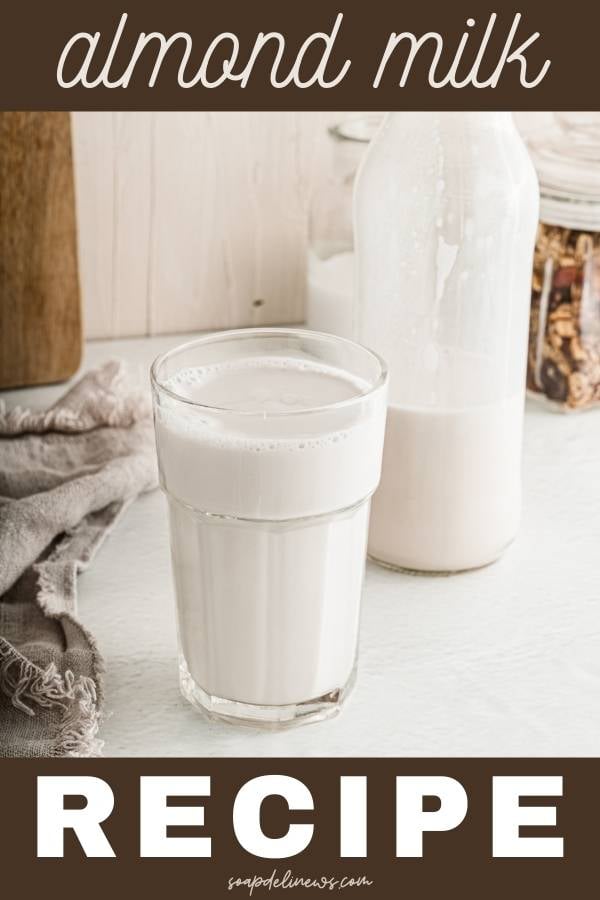 Here are some tips to help you when you learn how to make creamy almond milk for its nutritional benefits:

How to Use Almond Milk

You can use homemade almond milk in a variety of ways and in any recipe that calls for this nut milk. It can be used in the following types of recipes:

Or try it in one of these delicious recipes:

You can also use the leftover almonds from my homemade almond milk recipe to make flourless lemon almond cookies. The almond pulp makes the cookies moist and gives them a buttery taste.