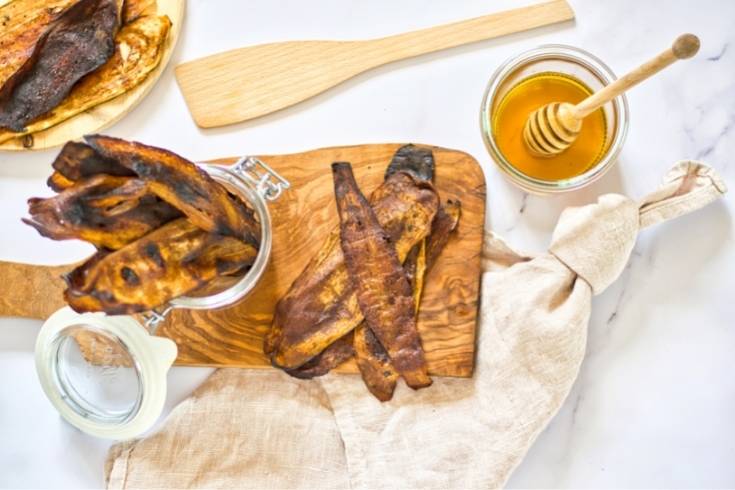 Learn how to make an eggplant bacon recipe as a vegetable bacon substitute. This crispy eggplant bacon is an excellent vegan or vegetarian alternative for breakfast or sandwiches. It’s healthy and easy to make.

Perhaps one of the hardest foods to give up is bacon when switching to a vegan lifestyle. Bacon is delicious on its own, on sandwiches and in salads. However, bacon is full of ingredients that you may not want to eat, even if you aren’t vegan or vegetarian.

Fortunately, vegan eggplant bacon is easy to make. This vegetarian bacon substitute is a great way to eat more vegetables, and it’s a low cost alternative to store bought vegan bacon. It stores for up to 5 days in the fridge or a month in the freezer, so make a batch and use it for several dishes before you need to make more.

I’ve seen several vegetarian bacon substitute recipes that call for different vegetables. However, I prefer this recipe for eggplant bacon because eggplants have a mild flavor. Like zucchini and squash, eggplant takes on the flavor of other ingredients. Therefore, this vegetable bacon tastes like the seasonings that you use and not like a vegetable. 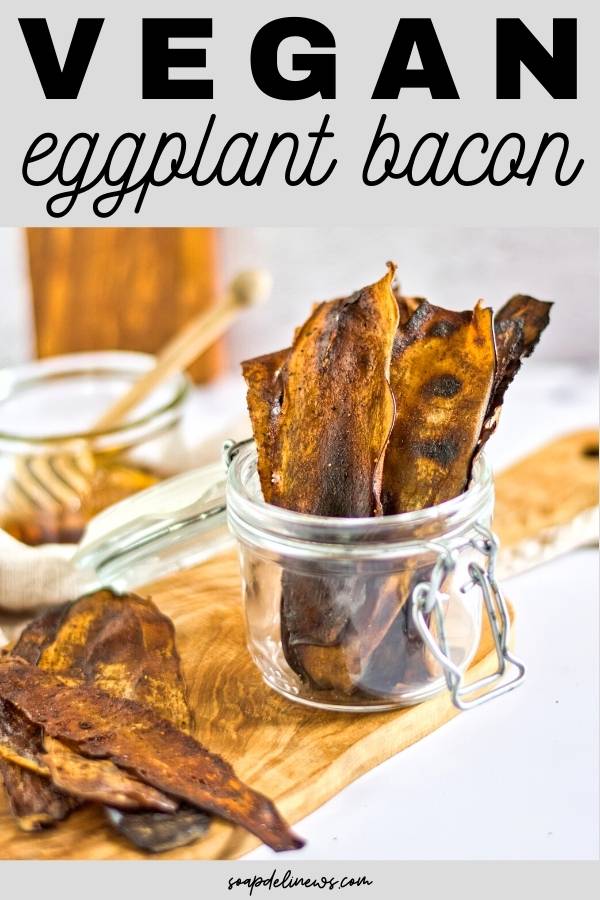 What is Eggplant Bacon?

This recipe for eggplant bacon is an easy to make and low cost vegetable bacon. Instead of using meat, you use eggplant slices to make bacon slices. To get a bacon flavor, use soy sauce, maple syrup and spices.

Vegan eggplant bacon looks like real bacon and has a texture similar to real bacon. However, it does taste a little different. I think it tastes great, so I use it as a substitute for bacon for sandwiches and salads.

What is Vegan Bacon?

There are several types of vegan bacon. They are tempeh bacon, tofu bacon and vegetable bacon.

What is Tempeh Bacon?

Tempeh bacon is a vegetarian alternative to bacon. It contains less fat and has zero cholesterol. While traditionally made from slightly fermented soybeans, tempeh bacon can be made using any type of bean including black-eyed peas, black beans and chickpeas. Not only is tempeh bacon a good source of fiber, it’s also high in both vitamin B6 and magnesium. 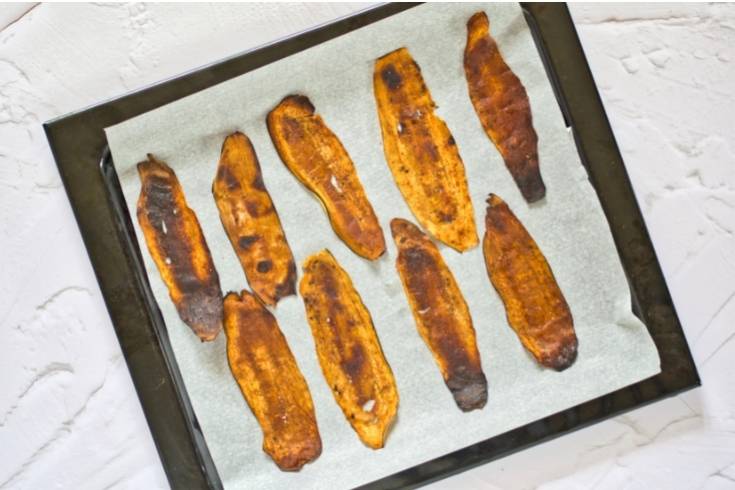 What is Tofu Bacon?

Tofu bacon is another healthy alternative to bacon. It’s processed a bit more than tempeh bacon, however it’s high in protein. In addition, tofu bacon also contains all eight essential amino acids, and a notable amount of both calcium and iron.

What is Vegetable Bacon?

Eggplant, and other veggies properly seasoned, can take on that smokey flavor you get from bacon. Simply add some smoked paprika, dried Chipotle chili peppers or a savory sweet sauce to your vegetable of choice then grill, smoke or roast. Additions such as fresh, grated parmesan cheese as garnish once the dish is plated can make up for the loss of the “beefier” bacon texture. 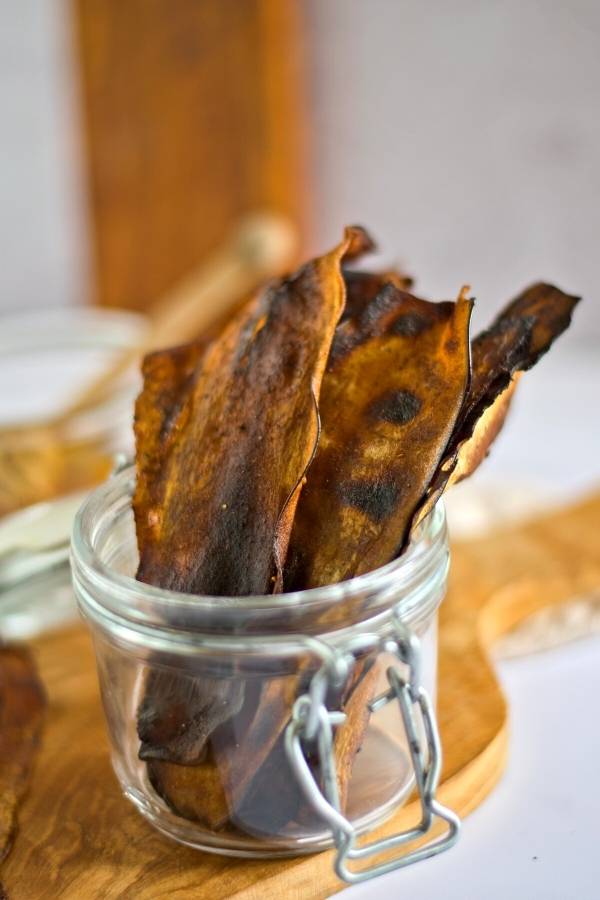 Is Eggplant Bacon Healthier Than Other Vegan Bacon Alternatives?

This eggplant bacon recipe is a healthy recipe. It’s low in calories, fat and cholesterol. In addition, vegan bacon made with eggplant also has several vitamins and minerals including Vitamin C, Vitamin K, potassium, manganese and folate. Eggplants also have trace amounts of niacin, copper and magnesium.

Eggplants have just 20 calories per serving (one cup). There are 3 grams of fiber and only 5 grams of carbs per serving. You’ll also get 1 gram of protein per serving.

Can I Make Eggplant Bacon in an Air Fryer?

Yes, you can make this recipe for eggplant bacon in an air fryer. Air frying makes a crispy vegetable bacon. Use the same recipe (as found below) and preheat your air fryer to 300 degrees Fahrenheit. Then place the prepared eggplant slices in a single layer on your rack and cook for 10 to 15 minutes, or until dry and browned. 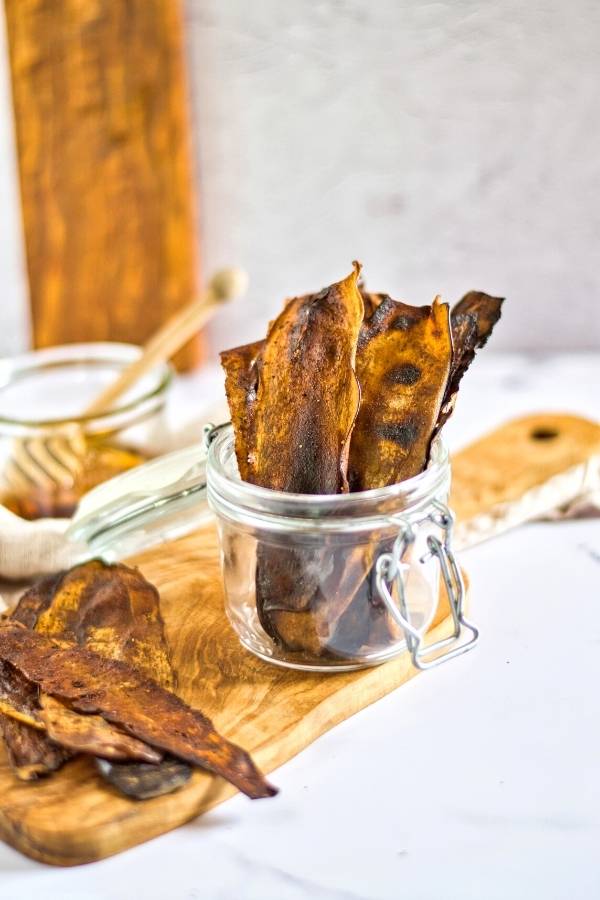 To make this eggplant bacon recipe, you will need the following ingredients: 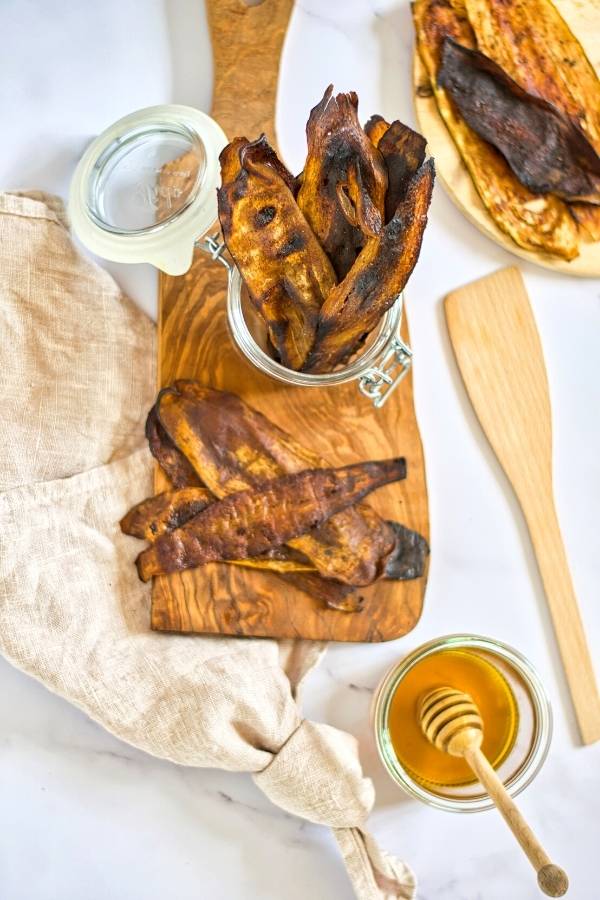 How to Make Eggplant Bacon

2. While oven preheats, cut the eggplant in half lengthwise. Then use a mandolin slicer (recommended) or a very sharp knife to slice the eggplant into thin strips. It’s important to make thin strips of eggplant as thick strips won’t get crispy. After slicing the eggplant, lay the strips out onto the lined baking sheet and set aside. 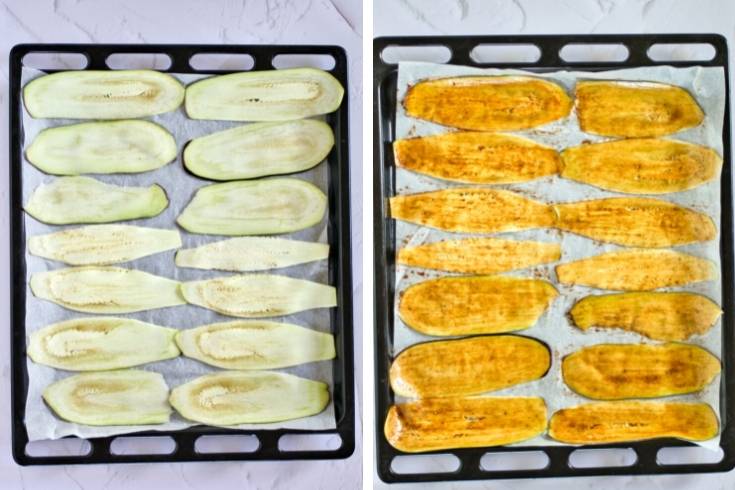 3. Next, combine the soy sauce, smoked paprika, olive oil, maple syrup, salt and pepper in a medium size bowl. Mix to combine. This mixture will give the eggplant its bacon flavor.

4. Now use a pastry brush to coat each side of the sliced eggplants with the soy sauce mixture.

5. Bake your vegetable bacon for 15 minutes. Then turn the vegan bacon over and bake for an additional 10 to 15 minutes, or until browned and crispy.

How to Store Vegetable Bacon

Store leftover vegetable bacon in an airtight container for up to 5 days in the fridge. You can also store it in the freezer for up to a month. I recommend using a freezer bag or freezer container so the flavor stays true. These reusable freezer bags are also great.

You can also make this vegan crispy bacon using other vegetables in place of the eggplant. Simply follow the same instructions for making eggplant bacon to make vegetable bacon using either carrots or mushrooms.

You can use your crispy eggplant bacon in any recipe that calls for bacon. Here are some of my favorite ways to use it:

Or try one of my other eggplant recipes.